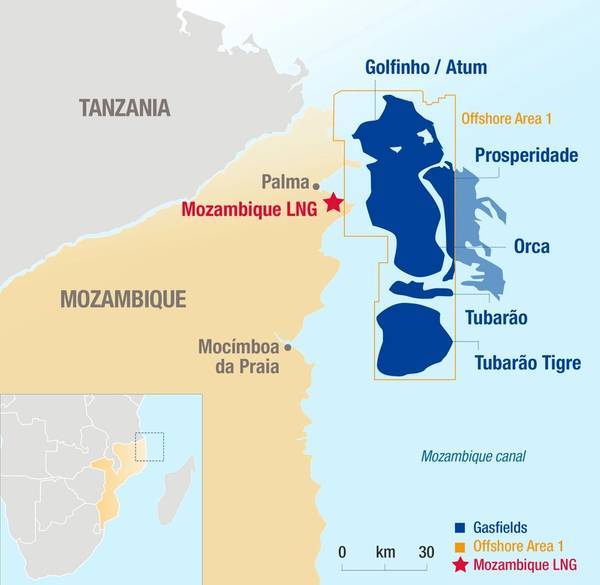 The U.S. EXIM Bank has amended its previously approved September 2019 direct loan supporting U.S. exports for the development and construction of the Total-operated LNG project located on the Afungi Peninsula in northern Mozambique.

The original scope of the $4.7 billion loan for the project has been amended from exclusively the onshore portion of the LNG plant and related facilities to also allocate an estimated $1.8 billion to support the project’s offshore production.

"As a result, the transaction now will support an increased number—16,700—of estimated American jobs over the five-year construction period," EXIM said Friday.

The number of U.S. suppliers also has increased to 68, with 31 suppliers added to the 37 companies previously identified, the bank said.

These suppliers are located in two more states—Louisiana and Oklahoma—in addition to the previously announced states of Florida, Georgia, New York, Pennsylvania, Tennessee, and Texas, and the District of Columbia. Follow-on sales are expected to support thousands of additional jobs across the United States, Exim said.

"As was previously underscored, private financing was not available for this project given its size, complexity, and risk—necessitating support from EXIM. We were told that China and Russia were slated to finance this deal before our EXIM board quorum was restored by the U.S. Senate one year ago. This is a great example of how a revitalized EXIM, thanks to President Trump’s leadership and bipartisan support from Congress, can help ensure the use of ‘Made in the U.S.A.’ products and services, without ceding ground to countries like China and Russia.”

The Mozambique LNG project, previously operated by Anadarko, will be Mozambique’s first onshore LNG development, initially consisting of two LNG trains with a total nameplate capacity of 12.88 million tonnes per annum (MTPA) to support the development of the Golfinho/Atum fields located entirely within Offshore Area 1.

Anadarko made the final investment decision for the project in 2019, with Wood Mackenzie at the time estimating the project would take $20 billion to develop. Anadarko was subsequently bought by Oxy, which sold Anadarko's assets in Africa to Total. Total closed the acquisition of Anadarko’s 26.5% operated interest in the Mozambique LNG project in September 2019.