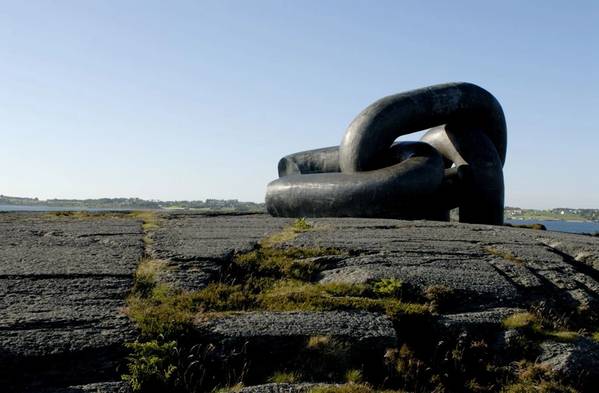 Broken Chain Monument in Norway. Built to honor the victims of the Alexander Kielland disaster - Image by Robert Rozbora - AdobeStock

It was March 27th, 1980. The Alexander Kielland offshore accommodation unit was linked to the Edda platform in the Ekofisk area of the North Sea, offshore Norway.

Workers aboard were weather-bound to the floatel, because of the fog, and then the storm began to blow up, meaning helicopters couldn't fly, and everything was shut down for the day.

With the weather turning worse, a decision was made to remove the gangway that was connecting the gangway from the platform

At 18:00, there were 212 people on board the Alexander Kielland. "After 15 minutes or so, we heard a very powerful thump," one of the crewmembers recalls in a 20-minute movie shared by the Petroleum Safety Authority last week.

Then came a much bigger bang, recalls another one, and the rig began to tip over.

"I managed to send a brief emergency message, 'Mayday, mayday Kielland is capsizing,' a survivor recalls.

One of the five support columns at Kielland had torn off, the floatel listed, took in water and overturned in 20 minutes.

"Events developed so quickly that few of the 212 people on board managed to get to their cabin to fetch a survival suit. Only eight managed to put one on – and four of those survived.

"Three of the seven lifeboats, with space for 50 people, were crushed by waves hitting the rig columns during lowering. Only two of the boats, therefore, remained usable.

"And nobody on board managed to operate the release mechanism for the liferafts, which were capable of accommodating 400 people.

"Temperatures of 7°C in the air and 4°C in the sea meant that those who fell into the water had little chance. A few managed to swim to the Edda platform and were hoisted on board. But 123 people died in the North Sea that evening. Eighty-nine survived," Inger Anda, Director of communication and public affairs for the Petroleum Safety Authority, wrote in an article last week.

See below a detailed video on the incident, with testimonies of the survivors, as well as to learn more about the cause of the incident, as shared by the Petroleum Safety Authority Norway - (the article continues below the video)

A turning point for the industry

"This was a turning point not only for the industry but also for the whole country,” Myhrvold said. “We’ve worked differently on safety since 1980 –  on regulatory roles, development of the regulations and not least clarifying the responsibility of the companies. They’re the ones responsible for safety – every single day.

"Although much safety work had also been done before the Kielland, this disaster revealed weaknesses with emergency preparedness, training, the division of responsibility, regulation and government follow-up."

“Important and lasting changes and improvements were therefore made to the regime in the following years.”

Myhrvold said that following the incident, large parts of the safety regime were reviewed and reshaped.

"Changes to the regulations and the division of responsibility form the basis for today’s system and the high level of safety we now enjoy," she said.

"The specific lessons from the disaster have long since been followed up, Myhrvold says. “But Kielland still has great value, and illustrates the huge consequences a major accident can have – for individuals and families, for the industry and for society. It shows what can go wrong when safety and emergency preparedness are inadequate. “

We can't be satisfied

"We see that much good work is being done to improve safety, but we nevertheless still witness serious incidents,” she says. “Some of these have been very critical, and it would not have taken much to turn them into a major accident.

"That means we can’t be satisfied. We must work better throughout. The companies must constantly make systematic efforts to avoid things going wrong.”

"They must also ask themselves whether they are taking an integrated approach to humans, technology and organization and whether their solutions are sufficiently robust to cope with the unforeseen. Work on these and other issues related to improving safety is crucial.

“It’s our duty to learn from Kielland and other incidents, and to use these lessons in such a way that we avoid a new major accident.”