RockRose to Buy Speedwell and Its North Sea Gas Asset 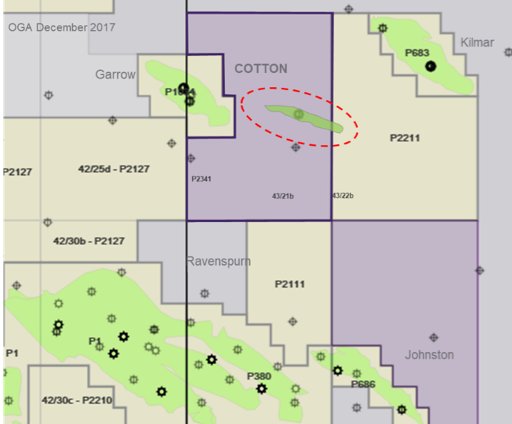 RockRose Energy has signed a deal to buy Speedwell Energy, a company owning a 100% stake in the Cotton gas field in the UK sector of the Southern North Sea.

RockRose said Tuesday that the deal was "for a limited initial consideration," with the larger part of consideration becoming due at Final Investment Decision ("FID"). RockRose did not say what the initial fee was

The field was discovered in 2009 by well 43/21b-5Z, which encountered a gas column of up to 1,260 feet over six gas bearing sandstone units. Speedwell estimates Cotton contains recoverable gas resources of 97Bcf (16.7mmboe) and has the potential to produce at a peak rate of up to 70mmscf/d (12,000 boepd) from two horizontal development wells.

A draft Field Development Plan ("FDP") has been prepared by Speedwell for submission to the OGA. Key contractors have been identified and engagement with both of them and the owners of the export infrastructure, anticipated to be used, is on-going.

Prior to taking FID, RockRose Energy said it would carry out further studies to ensure that both the subsurface delivery and the project economics are robust, "particularly given the current challenging gas price. "

The Cotton field lies 100 kilometers east of Scarborough between the Kilmar and Garrow fields in both of which RockRose holds a 15% interest.

Andrew Austin, Executive Chairman of RockRose, said: "This acquisition gives RockRose the option of a significant amount of production and reserves in an area of the Southern North Sea Gas Basin in which we already have other producing assets. We look forward to carrying out further evaluation of the discovery prior to committing to FID."

Richard T Strachan CEO of Speedwell Energy Limited said: "Having identified the potential in Cotton some three years ago, which was a relinquished asset going nowhere, to one now where we have a draft Field Development Plan and a delivery team in place capable of bringing Cotton through to First Gas, we are delighted that RockRose will now take over Cotton and  are looking at how to potentially take it forward and we wish them all the best as they do so."