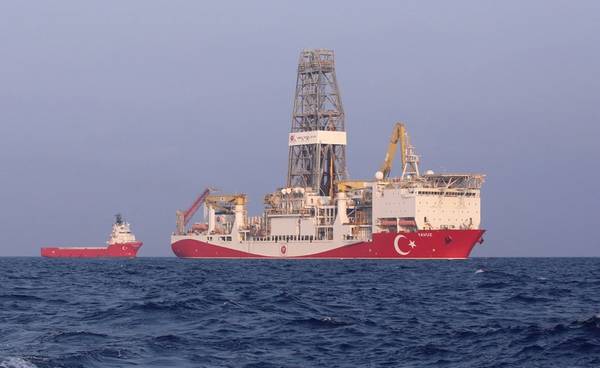 Two Turkish drill ships are continuing operations in the eastern Mediterranean and another ship will join them this month, Energy Minister Fatih Donmez said, as a dispute over natural resources there fuels tensions between Turkey and Cyprus.

EU member Cyprus and Turkey have argued for years regarding the ownership of fossil fuels in the eastern Mediterranean, where Ankara says Turkish Cypriots are entitled to a share of the resources.

Turkey has sent two drilling ships, Fatih and Yavuz, as well as an exploration vessel, to operate in waters off the divided island of Cyprus, prompting accusations from Greece that it is undermining security in the region.

Aboard the Yavuz drill ship, off the northeastern coast of Cyprus, Donmez told reporters that a second exploration vessel would begin work in the area by the end of August. A Turkish frigate and patrol boat accompanied the Yavuz.

"Fatih is continuing to drill in the Finike-1 borehole in the areas licensed to Turkey. Yavuz is continuing its operations in the Karpaz-1 borehole," he said in comments made on Tuesday but embargoed until Wednesday.

"The Oruc Reis seismic exploration ship will join this work as of the end of August," he said.

Turkey's operations in the region have drawn a reaction from its Western allies, including the European Union and the United States.

"We support a peaceful, stable region and we discourage provocative actions by any players," U.S. Assistant Secretary of State for Energy Resources Francis Fannon said on Tuesday, when asked about Turkey's moves in the region.

EU foreign ministers last month suspended negotiations on a comprehensive air transport agreement and decided not to hold further EU-Turkey high-level dialogue for the time being.

Cyprus was divided in 1974 after a Turkish invasion triggered by a brief, Greek-inspired coup. Several peacemaking efforts have failed and the discovery of offshore resources in the eastern Mediterranean has complicated the negotiations.

On Friday, Cypriot President Nicos Anastasiades and Turkish Cypriot leader Mustafa Akinci will discuss a way out of an impasse in peace talks, which have been stalled for two years.

Akinci said the Greek Cypriot side was making unilateral attempts to explore for natural gas in the eastern Mediterranean despite repeated Turkish Cypriot proposals to resolve the issue.

"This doesn't leave the Cypriot Turkish side and Turkey with any choice other than what we are doing right now," Akinci told Reuters TV in an interview.

Speaking to Turkish ambassadors in Ankara on Tuesday, President Tayyip Erdogan said Turkey would continue to protect the rights of Turkish Cypriots.

"We cannot remain indifferent to the attempts at theft and sabotage that are being carried out under the name of drilling," he said.