The Ministry of Energy & Water in Lebanon together with the Lebanese Petroleum Administration announced via their website the recommended blocks for bidding during the Lebanese 2nd licensing round for hydrocarbon exploration offshore Lebanon.

LPA has recommended 4 blocks for the upcoming 2nd licensing round, which is expected to start in early 2019. The recommended blocks are 1, 5, 8 & 10. This recommendation was also announced during a presentation given at PETEX 2018 in London on November 26, during which Mr Wissam Chbat, head of the geology and geophysics unit, has publicly announced that.

Block 1 lies in the Lattakia Ridge zone, which according to Agenor Energy’s analysis and to a recent publication by Ghalayini et al. (2018),  consists of Late Cretaceous 4-way closed traps and a mixed thermogenic/biogenic system.

In this domain, reservoirs are in the Upper Miocene and Lower Oligocene and have not been drilled yet in the basin. They are believed to be different than the base Miocene Tamar sand. Block 5 and 8 are in the deep basin domain, which according to the same studies, are characterised by 3-way traps closed against normal faults.

It is expected that these traps are charged by Oligo-Miocene biogenic gas and the reservoirs are analogous to the base Miocene Tamar sand. Block 10 lies along the margin domain and stratigraphic traps, such as Oligo-Miocene clastic pinchouts and Cretaceous carbonate reefs, are expected.

Although this is still a recommendation, the open blocks will not be officially announced until the Lebanese council of ministers approves this recommendation via a decree. It is very possible that the official blocks might be different. When the first bid round was launched in 2013, Block 1, 4, 5, 6, and 9 were open for bidding. However, when the tender was resumed in 2017, Block 1, 4, 8, 9, and 10 were put on offer.

Lebanon currently has a caretaker government since April 2018 due to a stall in cabinet formation as political parties are unable to agree and nominate ministers. The caretaker government is not allowed by the constitution to issue decrees, making it uncertain on when exactly the second licensing round will start. 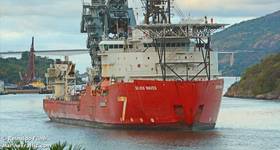