As the jacket for Statoil's Gudrun development went in last month, confirmation that there was communication between the Norwegian operator's high-impact Aldous Major South discovery and Lundin's Avaldsnes oil find was generating much excitement. Meg Chesshyre reports.

The jacket for Statoil's Gudrun platform was installed by Saipem's S7000 in July/August in Norwegian block 15/3. Weighing some 7000t in total, the jacket, supplied by Kvaerner under an EPC contact and built at its Verdal yard, comprises two main structures of almost 2300t each tied together by six horizontal frames and various bracings.

The next development milestone is the start of pre-drilling production wells on the field in the fourth quarter of this year. The platform will have 16 well slots. Plans call for seven production wells. The other slots may be used for further drilling to boost Gudrun output or for wells on other fields.

The wells will be tied back to the platform for partial processing and oil and gas export. Final processing of Gudrun's output will take place on Sleipner A, with the gas piped to the adjacent Sleipner T platform for carbon dioxide removal. In addition, electricity to operate the Gudrun installation, once it comes onstream in 2014, will be supplied from Sleipner A.

Gudrun, one of Statoil's largest current development projects on the Norwegian continental shelf, contains some 127 million barrels of oil equivalent. The licensees in PL 025 are operator Statoil (75%) and GdF Suez (25%). The total investment is around NKr 21 billion.

Statoil has had a good year so far in exploration terms. Its most recent success was the high impact oil discovery on the Aldous Major South prospect (PL 265) in the Norwegian sector of the North Sea. Well 16/2-8, drilled by the Transocean Leader, identified a column of about 65m in Jurassic sandstone. The acquired data confirm that this is a reservoir of excellent quality.

Aldous Major South is located some 35km south of the Statoil-operated Grane field and west of another North Sea discovery, Lundin's Avaldsnes (licence PL 501), where Statoil has a 40% stake.

Communication between the Aldous and Avaldsnes oil discoveries was confirmed mid-August and it is thought that in combination these discoveries may represent an oil structure of between 500 million and 1.2 billion barrels of recoverable oil equivalent. If the upper part of the interval strikes pay dirt, the discovery will rank as one of the ten largest oil finds ever on the NCS.

Statoil has a 40% stake both in licence PL 265, where Aldous was discovered, and in PL 501, where the Avaldsnes discovery was made.

‘Aldous/Avaldsnes is a giant oil discovery, and according to our estimates the combined discovery may make the "Top 10" list of NCS oil discoveries. Norway has not seen a similar oil discovery since the mid-eighties,' says Tim Dodson, Statoil's EVP for exploration. This is the third high-impact discovery for Statoil as an operator in 2011. In April, the 250 million barrel Skrugard oil discovery was made in the Barents Sea, and the 150-300 million barrel Peregrino South oil field was discovered offshore Brazil.

The Transocean Leader drilling rig will soon spud the Aldous Major North well 16/2-9 (PL265) to clarify the further potential and any communication with Aldous/Avaldsnes. OE

The Gudrun jacket, pictured during installation this summer, became the first delivery from the newly demerged Kvaerner when it was handed over to Statoil in July. But it was the 35th jacket fabricated to date by the Verdal yard and Kvaerner EVP Nina Udnes Tronstad said the fast-track project had suffered no lost-time injuries or serious accidents.

Bringing dead seabed back to life

Based on research performed by the University of Gothenburg, Norwegian naval architect's Inocean have developed a wind-driven, floating deepwater pump for oxygenation of the vast seabed areas devoid of aquatic life in the Baltic Sea between Sweden and the Baltic countries.

‘The first demonstration pump is expected to be operational in about 18 months,' reports Inocean's Holger Eriksson. ‘After that a more extensive programme involving larger deepwater pumps will be deployed.

‘The technology can be scaled up and down and is also suitable for freshwater lakes or salt water fjords with similar problems around the world.'

The idea is to integrate a pump with a floating wind turbine so that wind power pumps oxygen-rich surface water down to the dead seabed, providing the prerequisites for the generation of new ecosystems and allowing nature itself to tackle the problematic over-production of algae. Algae thrive on phosphorous compounds from fertilizer runoffs, killing off the natural flora and fauna of the seabed. ‘The method can be compared to the establishment of wetlands ashore,' explains Eriksson. ‘A pilot project involving this method has given great results.'

According to Eriksson, the demonstrator pump – capable of moving 40m3 of water per second – will be located in the waters southeast of Stockholm and placed in a pipe leading 100m below the surface. The wind turbine will be mounted on a 50m tower above the surface.

The new DP3 semi's predecessors, Floatel Superior (pictured) and Floatel Reliance, were delivered by the Singapore yard last year, in March and October respectively. The Superior is presently operating for Statoil in the North Sea while Reliance began a five-year charter for Petrobras in January.

Capable of accommodating 500 people in one- and two-man cabins, the new unit will be marketed in the UK North Sea as well as the Gulf of Mexico, Brazil, West Africa and Western Australia.

‘What Keppel Fels has built for us previously has been well received by the market and both units are now operating successfully,' says Floatel International CEO Peter Jacobsson. ‘We have ordered this third unit as we continue to see strong demand for such highly capable accommodation vessels, and we believe we are well positioned to strengthen our offerings in this market segment.'

In August, the management company entered into an amalgamation agreement with Aqua Pellentesque, a company controlled by a majority of existing shareholders in Floatel International. OE 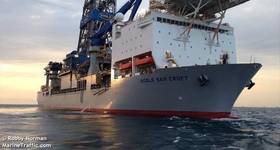