With 70m broad stern, Petroleum GeoServices' (PGS) new Ramform Titan holds the honor of being the widest streamer vessel, capable of towing 24 streamers. Before the Ramford Titan, there was the 22 streamer Ramford Sovereign. Unveiled in 2008, the double-hulled vessel, measured 102m long by 40m wide. When Aker Yards began construction in 2006, it used 4,000 tons of steel to build the hull. Watch the video above to learn more about this huge seismic vessel! 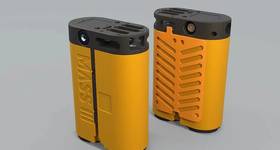