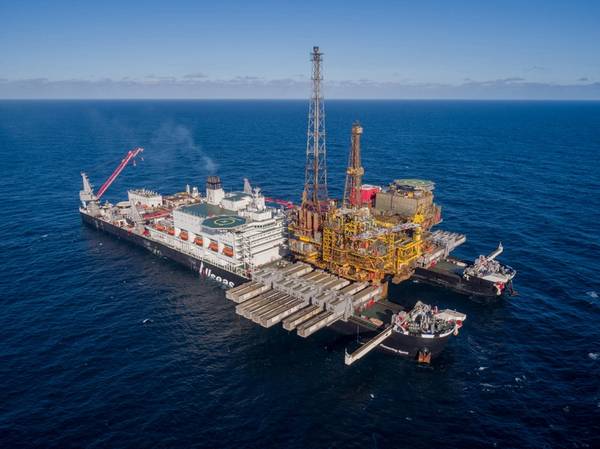 Allseas’ planned vessel, to be called Amazing Grace, will be a larger version of the firm’s existing Pioneering Spirit ship, which removed Shell's Brent Delta platform in the North Sea last year (pictured). (Photo: Allseas)
Swiss offshore services firm Allseas is planning to build a vessel big enough to be able to remove the world's largest oil and gas platforms when they reach the end of their production lives, its chief executive said.
The vessel, to be called Amazing Grace, is designed to remove the heaviest platforms in a single lift and could reduce decommissioning costs for global oil and gas producers, the firm said.
It would be a bigger version of Allseas' existing Pioneering Spirit ship, which removed Shell's Brent Delta platform in the North Sea last year, and would cost about $3 billion, Allseas CEO Edward Heerema told Reuters.
"We have been asked by the operators to look at the technical possibilities to remove bigger platforms," he said on the sidelines of a conference, adding that an investment decision on Amazing Grace could come in three years.
"Due to its speed, single-lift technology is the most cost-efficient method to use," he added.
If Allseas decides to go ahead, it would set a new record as the biggest such vessel ever built, with 50 percent more lifting capacity than Pioneering Spirit, at 72,000 metric tonnes, said the chief executive.
Its length will reach 160 meters, making it about one third longer than Pioneering Spirit.
Allseas' Pioneering Spirit, holding the current record, is currently laying Gazprom's Turkstream pipeline from Russia to Turkey through the Black Sea.
The vessel would be able to remove the biggest platforms of Statfjord, Gullfaks and Thistle fields offshore Norway and Britain, whose operators have contacted Allseas for a platform removal concept research, added Heerema.
(Editing by Gwladys Fouche and Louise Heavens)
Shipbuilding Offshore Energy News Vessels Offshore Energy