SBM Offshore Closes $1.75B Financing for Its Largest FPSO Yet 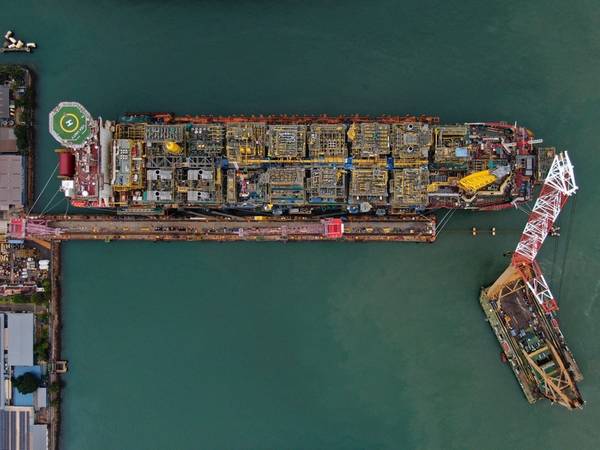 Dutch FPSO leasing specialist SBM Offshore said Thursday it had completed the US$1.75 billion project financing for the FPSO One Guyana. The company has previously said that this would be the company's largest FPSO so far. It will be deployed at ExxonMobil's Yellowtail development, offshore Guyana.

The Dutch firm, which is behind all four FPSO projects in Guyana, said the One Guyana project financing was secured by a consortium of 15 international banks. SBM Offshore expects to draw the loan in full, phased over the construction period of the FPSO.

"The financing will become non-recourse once the FPSO is completed and the pre-completion guarantee has been released. The project loan is in line with the duration of the charter hence a two-year tenor post-completion, and carries a variable interest rate based on SOFR plus 2.2% margin," SBM Offshore said.

ExxonMobil said in May that the Payara FPSO construction was about five months ahead of schedule, with start-up likely before year-end 2023 and not in 2024 as previously planned.

Back to the One Guyana FPSO, the unit is based on SBM Offshore’s Fast4Ward program that incorporates the company’s new build, a multi-purpose hull combined with several standardized topsides modules.

SBM Offshore orders these hulls in China without contracts secured, so that when it does secure a contract, the FPSO delivery time is shorter.

The FPSO will be designed to produce approximately 250,000 barrels of oil per day, and will have an associated gas treatment capacity of 450 million cubic feet per day and a water injection capacity of 300,000 barrels per day.

The FPSO will be spread moored in a water depth of about 1,800 meters and will be able to store around 2 million barrels of crude oil.

The project is part of the Yellowtail development, which is the fourth development within the Stabroek block, located around 200 kilometers offshore Guyana. It is expected to begin production in 2025.

Back in April, the U.S. oil major said it had discovered oil in three new wells drilled offshore, raising recoverable oil and gas potential from its discoveries to nearly 11 billion barrels.

ExxonMobil's partner Hess said earlier this year that at least six FPSOs with a production capacity of more than 1 million gross barrels of oil per day could be online on the Stabroek Block in 2027, with the potential for up to 10 FPSOs to develop gross discovered recoverable resources in the offshore block.

According to World Energy Reports, ExxonMobil is set to order a 5th FPSO for the Stabroek block soon.

"It will be used to develop the Mako and Uaru discoveries. The FPSO will have 250,000+ b/d oil and 400+ mmcf/d gas production capability. Both SBM and Modec have been engaged in competing for pre-FEED work. The FPSO contract is expected to be awarded in early 2023," World Energy Reports said in the June edition of its Floating Production Systems report.