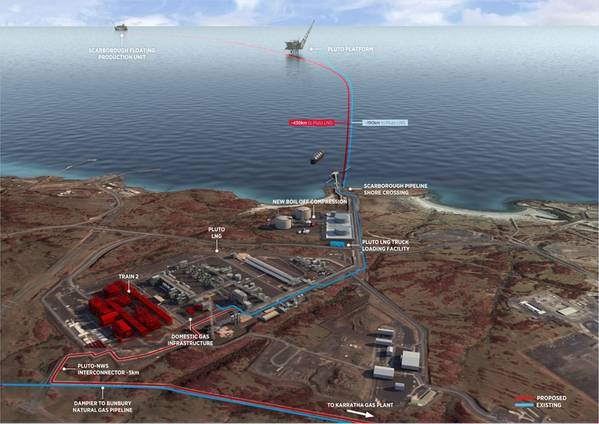 Australian oil and gas company Woodside has informed that the company and BHP, partners in the Scarborough offshore gas field in Australia, have received offers for the grant of petroleum production licenses for the blocks containing the gas field.

"The Scarborough Joint Venture has received offers for the grant of petroleum production licenses in respect of the WA-1-R (Scarborough) and WA-62-R (North Scarborough) titles from the Commonwealth and Western Australian Joint Authority," Woodside said in a statement on Monday.

The offer follows an agreement reached between Woodside and BHP in February 2020 to align their participating interests across the WA-1-R and WA-62-R titles resulting in Woodside holding a 73.5% interest and BHP holding a 26.5% interest in each title.

Woodside CEO Peter Coleman said the Scarborough Joint Venture intends to accept the production licenses, "demonstrating the strong commitment from both joint venture participants and the State and Federal Governments to taking the project forward."

The company had planned to sanction the project in early 2020, but it then in March delayed a final investment decision on the Scarborough project until 2021, to weather the oil price plunge.

In a statement on Monday, CEO Coleman said: "The impacts of COVID-19 and the ensuing volatility in market and investment conditions have provided us with an opportunity to review options for the Scarborough development, allowing us to improve execution certainty and increase the value of this world-class resource."

“With Production Licences and the Offshore Project Proposal environmental approval in place, Woodside will have secured the key primary Commonwealth approvals required to support a final investment decision,” he said.

Following acceptance, the Scarborough Joint Venture plans to apply for a pipeline license and submission of the Field Development Plan to the Joint Authority, preparing for a targeted final investment decision in the second half of 2021.

Retention lease renewal applications in respect of the WA-61-R and WA-63-R titles for the Thebe and Jupiter fields (part of the Greater Scarborough gas resource) were submitted to the Joint Authority in May 2020 and are currently under assessment.