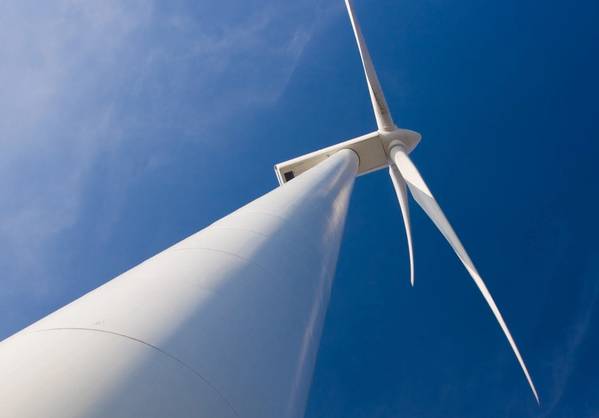 To support the California Energy Commission’s planning goals of 2-5 GW of offshore wind by 2030 and 25 GW by 2045 as well as a federal target to deploy 15 GW of floating wind by 2035, the Bureau of Ocean Energy Management (BOEM) has concluded the auction date for five 33-year leases offshore California. Exhibit 1 summarizes the outcome of the auction and estimates the potential of the lease areas using BOEMs standard power density formula of 3 MW per square kilometer, which is traditionally proven to be on the conservative side.

Starting with 43 pre-qualified bidders, successful companies proposed more that $757 million dollars in acquisition fees to secure the rights to operate floating wind farms for more than 30 years off the coast of California.

The six New York Bight leases netted close to $8 billion in acquisition fees. This represents an average of around $2.3 million be square kilometer or $2.3 million per 3 MW of capacity potential. The average agreed for the five California leases is around $501,000, or around 80% below the prices bid in the New York Bight process. The two Humboldt leases attracted the highest prices per square kilometer at over $615,000, more than the final offers for the two recent Carolina Long Bay auctions. The three Morro Bay leases average below $440,000 per square kilometer.

Exhibit 2 presents a summary of prices paid to date for all federal offshore wind leases off the Atlantic and Pacific coasts. 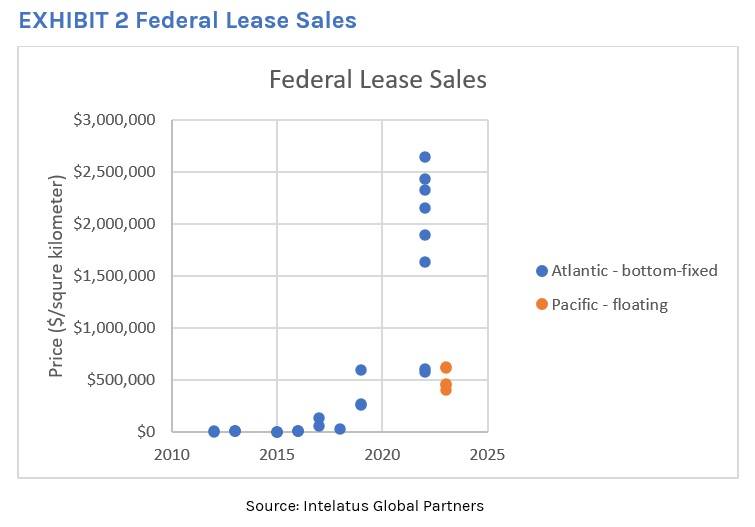 As with the recent New York Bight and Carolina Long Bay lease auctions, the California auction terms include incentives to develop local supply chains and community benefit agreements. The winner of a lease was chosen against a combination bid price and bid credits for supply chain development and community benefit agreements. The bidding credits are aimed at developing a floating wind supply chain that is not yet in place either within the U.S. or globally.

Who are the winners?
RWE Renewables is German utility, currently involved in the Maine Aqua Ventus, TetraSpar and DemoSATH floating wind demonstration projects. The Maine Aqua Ventus and SATH technologies are both concrete based, ideal for local content, and will be demonstrated in the United States in the coming two to four years.

Equinor Wind US LCC is a subsidiary of the Norwegian energy company with its own spar and semi-submersible floating wind technology. Equinor is currently developing the world’s largest floating wind project, Hywind Tampen in Norway.

Invenergy California Offshore, the U.S. renewable energy developer who secured a lease in the New York Bight auction earlier this year, has yet to declare a technology partner.

So, why the difference in pricing?
A key factor in the auction prices is that floating offshore wind is a relatively immature technology. Till now, less than 150 MW has been installed globally compared with around 60 GW globally. The largest floating wind farm under construction today is 88 MW. It is also the deepest at 300 meters.

The California floating wind projects pose several challenges, including some specific to California and some general to the industry. The challenges that the successful bidders face include:

Timing
Based on BOEM standard project review timelines, we anticipate the first project to start generating power by 2030 at the earliest with full commercial operations from 2031. This is a very aggressive timeline due to the immaturity of the global floating wind supply chain coupled with similar floating wind ambitions in the same time frame in Europe and Asia.

For more information about the Intelatus Global Partners, please visit www.intelatus.com or contact Philip Lewis at +44 203-966-2492

Philip Lewis is Director Research at Intelatus Global Partners. He has extensive market analysis and strategic planning experience in the global energy, maritime and offshore oil and gas sectors.