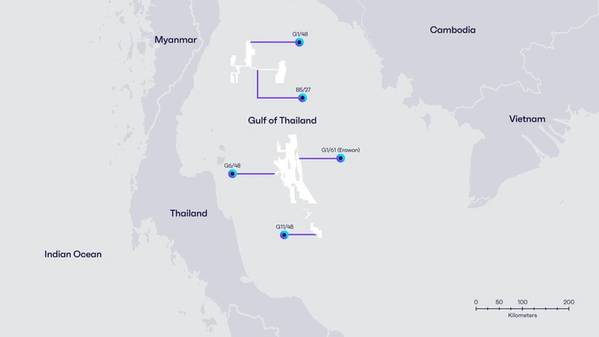 Valeura will acquire operated interest in in three offshore licences in the Gulf of Thailand that include the Nong Yao (Licence G11/48), Jasmine/Ban Yen (Licence B5/27) and Manora oil fields (Licence G1/48), which collectively currently produce approximately 21,200 bbls/d of oil, net to the interest being acquired.

The purchase consideration for the acquisition is US$10.4 million plus up to an additional US$50 million, contingent upon certain upside price scenarios.

The company also sees field life extension opportunities through ongoing infill drilling “to continue the assets' long history of reserves additions, amounting to approximately 80% replacement of produced reserves over the past five years.”

"This is a transformative transaction for Valeura, firmly establishing our Company as the largest independent operator of oil production in Thailand. By adding 21,200 bbls/d net to the SPV, we expect to immediately generate pre-tax cash flows of approximately $30 million per month, and this amount is expected to grow in the very near term as we increase production to 25,000 bbls/d and beyond with the addition of production from our pre-existing portfolio.

We set out to build a business that generates cash now, while providing re-investment opportunities for the medium-term, and we believe that the two acquisitions we have signed in 2022 accomplish these goals and more, creating significant value for our shareholders without dilution.

Our forward efforts will focus on developing the potential of these assets, by projects including further development of the Nong Yao field where we are forecasting peak production rates in 2024, re-investment into the Jasmine and Ban Yen fields to continue their long history of reserves replacement, and on selective step-out opportunities where we see the potential to more fully utilise the fields' extensive infrastructure to commercialize new accumulations.

As of the end of 2021, the assets held 24.1 million bbls of estimated 2P oil reserves, representing approximately a four-fold increase over our pre-existing corporate reserves.

This is not Valeura's first acquisition in the Gulf of Thailand. In Q2 2022, Valeura acquired KrisEnergy International (Thailand) Holdings Ltd. which owns and operates two licenses in the offshore Gulf of Thailand.

The acquisition included the suspended Wassana oil field and the fully appraised Rossukon oil field. Additionally, through a separate agreement, the company agreed to acquire the Mobile Production Unit Ingenium (“MOPU”) which is on location at the Wassana oil field.