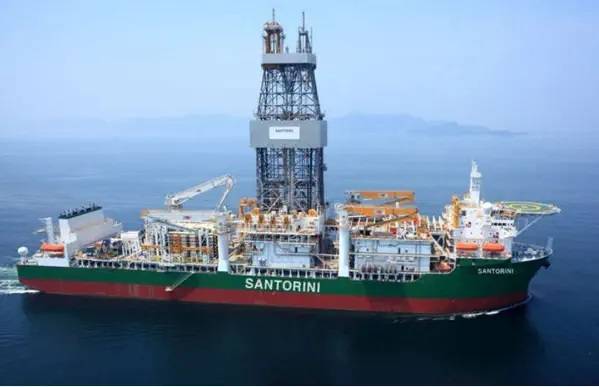 To remind, Saipem first chartered the drillship from Samsung in late 2021, signing a two-year contract that is still in effect. When the charter was first announced, fixings for 6th/7th generation rigs ranged from $190.000 to $210,000 per day.

Now, Saipem has decided to activate its purchase option and become the owner of the drillship, which was originally ordered by Ocean Rig, a drilling firm that Transocean purchased in 2018.

In September 2019, Transocean canceled the orders with Samsung for two newbuild drillships - the Ocean Rig Santorini and the Ocean Rig Crete - both ordered by Ocean Rig. The Santorini drillship is capable of operating at water depths up to 12,000 feet (over 3,500 meters).

Saipem said Monday that the exercise price of the purchase option was $230 million, to be paid by the end of 2022.

"The Santorini, whose construction was completed in 2021, is a technologically advanced vessel, equipped with two seven-cavity Blow Out Preventers (BOP), the highest standard for ultra-deepwater drillships, state-of-the-art operations automation systems, and the latest solutions to optimise environmental impact," Saipem said.

The 228-meter-long drillship is now operating in the Gulf of Mexico for the Italian oil firm Eni. This contract will be in effect until the third quarter of 2023.

Saipem said the decision to buy the deepwater drilling rig was based on "an expected return on investment (IRR) of over 15%, with a payback period of five years, estimated on the basis of the existing contract (covering most of the next financial year) and the Santorini's commercial prospects."

Among the reasons for the drillship fleet expansion, Saipem cited the favorable trend in demand in the offshore drilling segment and in particular deepwater.

"The significant growth of the deepwater market now offers interesting opportunities for the deployment of the fleet, both in markets where Saipem is traditionally present (such as Africa and the Mediterranean), and in segments where the supply of ultra-deepwater drilling rigs is already close to saturation (such as the Gulf of Mexico)," the company said.

Based in San Donato Milanese, a suburb of Milan, Saipem said it was in ongoing commercial talks with "major clients" in areas of potential use of the Santorini, "for which developments are expected in the short term."

The company also said there was a limited availability of technologically advanced assets such as the Santorini, in a global market environment where demand for drillships significantly exceeds supply, with a trend expected to strengthen.

Saipem also said the investment in the Santorini drillship would be financed entirely from available cash.

The company, which in October sold most of its onshore drilling rig fleet to KCA Deutag for $488 million, said the backlog of Saipem's offshore drilling activity to date amounted to more than 1.5 billion euros, "the highest value in the last six years."

Existing offshore drilling contracts, including options, result in a fleet commitment about 80% for 2023 and about 60% for 2024. Apart from the Santorini, Saipem owns two more drillships, the Saipem 12000 and Saipem 10000 ultra-deepwater drillships.

As for the Ocean Rig Crete, the other drillship for which Transocean cancelled the construction order for, Stena Drilling said back in December 2021 it had entered a purchase option agreement with Samsung Heavy Industries for the drillship. The company's CEO said at the time that "if we find a suitable contract, we will use the option to buy the unit."

In March 2022, Stena Drilling said in a social media post it was preparing to introduce the newest addition to its drilling fleet, the Stena Evolution drillship (ex-Ocean Rig Crete).

"We thought we’d post the proposed colors for the ship on social media to give an idea of what it will hopefully look like," CEO Erik Ronsberg explained to Offshore Engineer at the time.