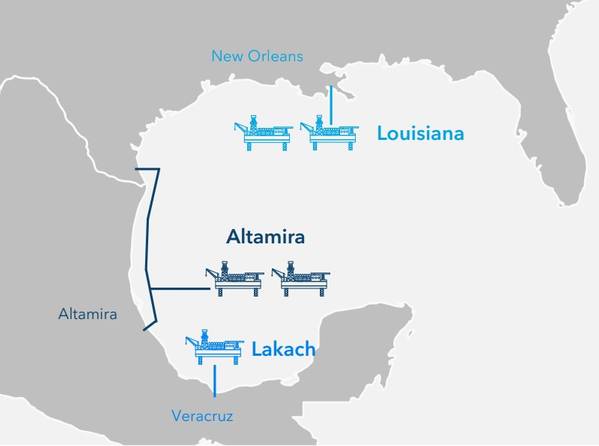 NFE, which has 5 Fast LNG units under development, said last week it that, subject to a deal with Pemex, it planned to invest in the continued development of the Lakach field over a two-year period by completing seven offshore wells and to deploy a 1.4 MTPA Fast LNG unit to liquefy the majority of the produced natural gas. Credit: NFE

Pemex announced in a statement that the deepwater Lakach field will pump 300 million cubic feet (MMCF) of gas per day over a 10-year horizon, after the state-run firm signed a service contract with U.S. liquefied natural gas company New Fortress Energy.

Lakach is believed to hold up to 937 billion cubic feet of gas reserves, but cost pressures put development on hold for six years.

President Andres Manuel Lopez Obrador has sought to prioritize energy self-sufficiency during his term, even as Mexico for decades has met most of its gasoline and natural gas demand through imported supplies, mostly from U.S. producers.

Gas production at Lakach is expected to begin in the first quarter of 2024, following initial investments of $1.4 billion by Pemex and $1.5 million by New Fortress Energy NFE.O.

The two companies signed a separate contract also on Monday agreeing that Pemex will sell 190 MMCF daily to New Fortress with the remaining 110 MMCF per day reserved for domestic consumption.

Partnering with oilfield service providers allows Pemex to retain full control, but does not permit sharing of risks or rewards.

Pemex added it will study gas fields on the periphery of Lakach for possible synergies.

Agustin Diaz Lastra, the former Pemex official who was recently tapped to lead the regulator, expressed optimism for the project's development last month.