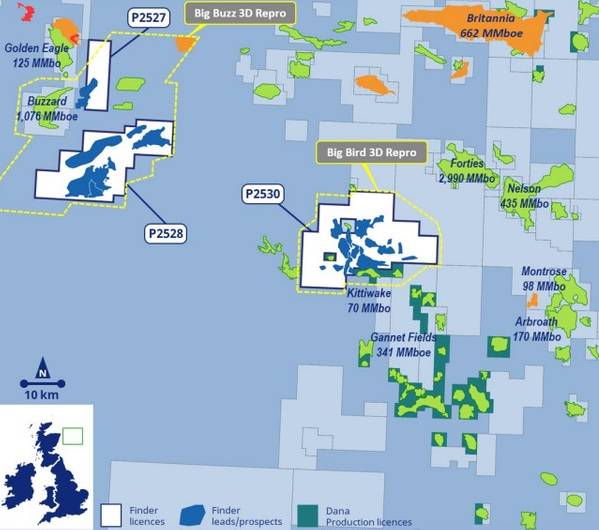 The Australian oil and gas company Finder has entered into three farm-out transactions to assign to Dana Petroleum interests in three offshore blocks in the central North Sea in the UK.

"Finder's retaining a 60% interest allows for secondary farm-outs to secure funding for wells whilst still retaining meaningful levels of participation in any discovery," Finder said.

Damon Neaves, Finder CEO said: “Dana Petroleum’s like-minded exploration strategy, development, and production capabilities, as well as ownership of proximal North Sea infrastructure, makes them a partner of choice for Finder and demonstrates the significant potential for further value-accretive deals from our ILX strategy. We are very pleased to build on our existing partnership with Dana. These three deals represent a significant expansion of our mutual aspirations in the North Sea, with a focus on prospectivity around the giant Buzzard Oil Field.

This results in Finder’s forecast cash runway being extended by more than 12 months, Finder said.

"The results of the reprocessed datasets have exceeded Finder’s expectations with both showing significant improvement in imaging at the target objectives. Interpretation and prospect generation on the new data is underway," the company said.

"Within P2527 and P2528 the Upper Jurassic sandstones form the key objectives for stratigraphic traps identified on the vintage 3D datasets. These are the same as the productive reservoirs of the giant Buzzard Oil Field (with reserves of over 1 billion barrels)," Finder said.

The Big Buzzre processing project took four vintage 3D surveys through a high-end processing flow to produce a final merged contiguous dataset over both licenses and surrounding analogous oil fields. Licence P2530 is located within the North Kittiwake Basin and is surrounded by the giant Forties and Nelson fields to the north, and the Kittiwake and Gannet Fields to the south.

The key play level in the license is the Upper Jurassic Fulmar Sandstones which are a proven and highly prolific reservoir in many nearby oil fields. Prospectivity is focussed within the Jurassic syn-rift depocenters and is associated with both salt cored highs and adjacent mini basins.

"Interpretation and prospect generation on the new Big Bird data is underway to better understand prospective resources and risking. Following interpretation of the new Big Buzz and Big Bird reprocessed data, Finder will commence a secondary farmout process in the new year aimed at securing partners and funding to drill the key prospect(s) that emerge from our evaluation of these datasets," Finder said.