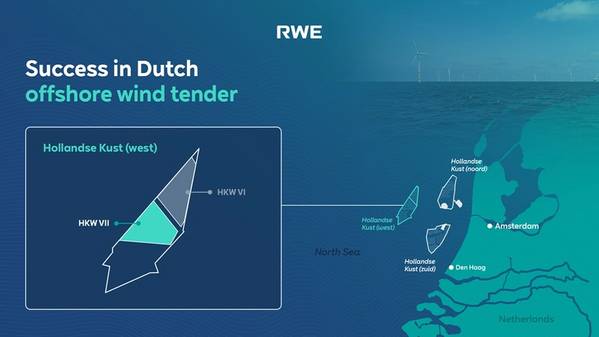 German energy company RWE on Thursday said it had won the right to build an offshore wind farm with a capacity of 760 megawatt (MW) in the Dutch part of the North Sea.

The wind farm - [Hollandse Kust West (HKW) VII] - will be built by a Dutch subsidiary of RWE that will get no subsidies on the energy produced.

Located around 50 km (31 miles) off the Dutch coast, the wind farm is expected to be operational by 2026 and should at that point provide the equivalent of around 6% of the current electricity consumption of the Netherlands, the Dutch government said in a separate statement.

The Netherlands aims to increase its offshore wind capacity to 21 gigawatt (GW) by 2030, as part of its bid to reduce its carbon dioxide emissions by 55% relative to 1990 levels by that time.

So far, a total capacity of 2.5 GW is operational, while a number of wind farms comparable in size to the one RWE will build are under construction.