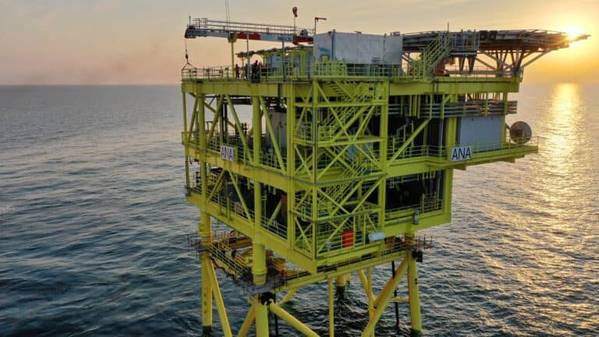 A new Black Sea offshore gas platform was officially launched off Romania on Tuesday and plans to extract gas despite risks posed by war in Ukraine, including mines detected in waters nearby.

BSOG said it planned to extract 1 billion cubic metres of gas per year, or roughly 10% of Romania's consumption.

Its platform, 120 kilometres offshore, sits around 45 km from Ukraine's Snake Island and BSOG CEO Mark Beacom told reporters that had an impact.

"We are not in a war zone, but we are close enough and it clearly has an impact. We've had mines detected close to the platform, we've had warships that go close to our platform and we've had airplanes circling our platform," he said. "But recall we started this project when none of this existed."

Beacom added the platform has no insurance. "You can’t get insurance after war starts, so, yeah, we are taking that risk," he said, without going into more detail.

The company moved forward with the project in 2019, despite a punitive tax imposed on offshore gas income by a former leftist government which put all other Black Sea exploration and development work on hold and contributed to Exxon's exit from the European Union state.

After years of stalling, Romanian lawmakers amended legislation in May, reducing the tax and removing export restrictions, hoping to unlock investment in the Black Sea where the country has an estimated 200 billion cubic metres of gas.

Beacom said the changes to the Romanian offshore gas tax are welcome but did not fully meet BSOG's expectations, adding the company moved forward with the project on government assurances the tax would be repealed.

While the tax has been lowered, Beacom said the company had started a process to take the government to the International Court of Arbitration in Paris. It was currently assessing whether to proceed with that.

"It has been helpful …but it isn't to the extent that we believe we have a legal right," Beacom said about the law. "Whether we move forward with the arbitration we’ll see, it’s still there and we’re assessing it."

(Reuters - Reporting by Luiza Ilie; editing by Krisztina Than and Jason Neely)