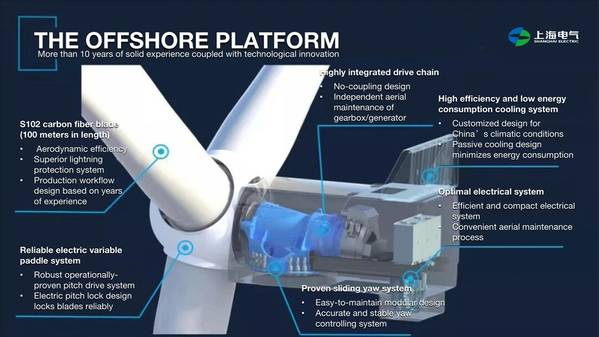 The wind turbine generator is designed for the medium-low wind speeds normally experienced just above the sea surface off the Chinese shoreline, as well as the different stresses placed on the equipment dependent on wind direction.

"Despite the average low wind speeds, the generator provides a cost-effective solution for the utilization of wind as an energy resource to drive the development of wind farms and allow China to meet the targets of carbon peaking and carbon neutrality as we enter the era of offshore parity," Shanghai Electric said.

According to the company, the offshore wind turbine generator is based on the Poseidon platform, which, the company says, "is known for its advanced blade design, reliable paddle and yaw system, efficient and low energy consumption cooling system, as well as optimal electrical system."

Based on an average annual wind speed of 7.5 meters per second, the system can generate 28 million kWh annually, meeting the annual electricity demand of 14,500 households while reducing coal consumption by nearly 10,000 tons and carbon dioxide emissions by 24,000 tons.

Also, Shanghai Electric says that with its latest LeapX control system, the EW8.X-230 reduces the operating load of the whole system while establishing an intelligent interconnection with Shanghai Electric's Fengyun system to continuously improve utilization rate and customer yield.