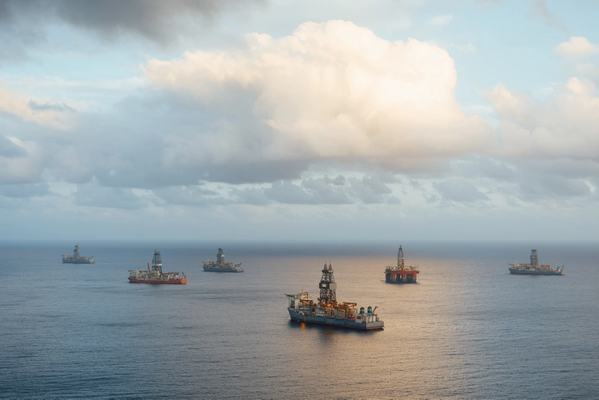 Utilization is one of the key barometers of the health of the offshore rig market, as it identifies what percentage of the usable fleet is available versus what is not.

While there has been much excitement over the past year regarding rapidly increasing offshore rig utilization (and dayrates), it appears the true extent of this tightening market is still not always being accurately represented across the industry.

There is a simple reason for this: there are several ways to look at offshore rig utilization.

A commonly used method, but one that is causing misrepresentation in market outlooks, considers only contracted rig utilization within the marketed (i.e., excluding cold stacked) rig fleet. This method looks at how many rigs are currently on hire within a set period but does not consider those non-working rigs that have future contracts in place.

Figure 1 shows what utilization looks like when only considering those rigs and indicates that the three main offshore rig segments – jack-ups, semi-submersibles, and drillships – all remain under 85% utilized, which is widely regarded as the minimum level needed to spur increases in dayrates, reactivations, etc. 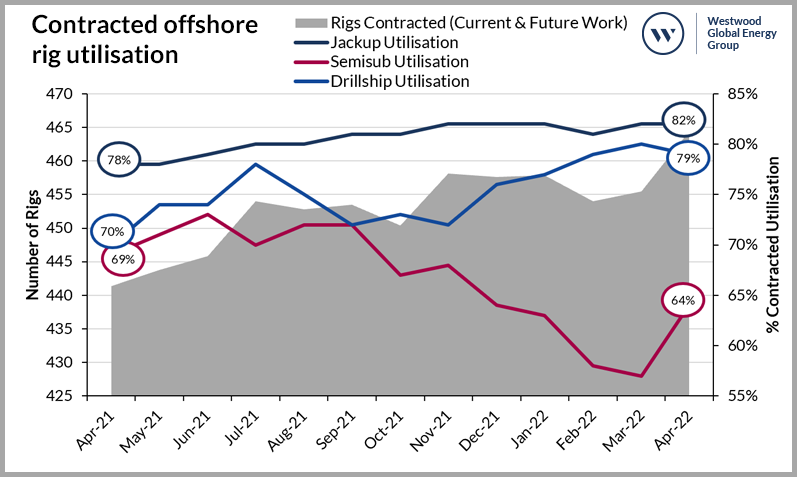 Jack-ups appear to be leading the way at 82% utilization, followed by drillships at around 79% and semi-subs trailing behind at just 64% after steadily falling away in the last year, before a rally in the past month.

But we know dayrates are quickly increasing, rig reactivations have started, and rig sales of units stranded at the shipyards are taking off. All of these are indications of a tight rig market, but those utilization levels are not high enough to cause the type of increases we have seen.

In reality, utilization is much higher

True rig availability is much tighter than what is shown by contracted utilization in Figure 1. To get an idea of what is really going on, you need to also consider those rigs that are currently idle, undergoing reactivation or other shipyard work but are committed for work in the future and hence not available for hire in the near term.

Figure 2, which adds future committed marketed rigs (as well as currently working and contracted units) into the mix tells a wildly different utilization tale. Although semisubs are still lagging behind jackups and drillships, utilization stands at 82%, some 18% above the contracted level. Jackup and drillship usage are both up 10% over contracted utilization, with the 92% for drillships, representing a nearly sold-out market. 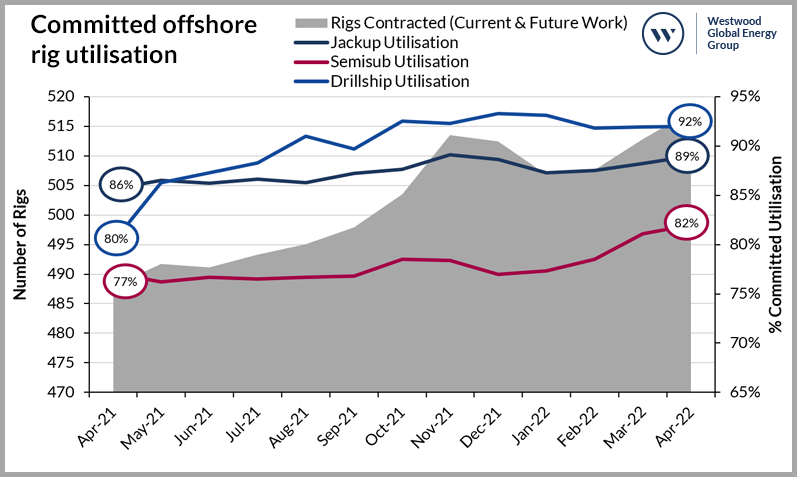 Break this down further by region or specific rig type (including design, age and capabilities) then these figures become even higher in some cases; starkly demonstrated by the US Gulf of Mexico and Brazilian drillship markets, which are both currently fully utilized with all rigs either currently on hire or preparing for future campaigns.

Extra supply is not a cheap or quick fix

For the first time in several years, due to this increasing committed utilization, most new rig contracts are being fixed at dayrates that are higher than their prior contracts – another indicator of a tightening rig market.

As active rigs sell out, especially those that meet the technical specifications required for an operator’s campaign, drilling contractors have begun to assess the cold stacked and stranded newbuild fleets to help remedy the sudden supply shortage. With many operators bidding for drilling programs that do not begin until late 2022 or in 2023, drilling contractors have the time necessary to reactivate or complete the construction of these rigs. Most rig owners report needing a 6–12-month reactivation period.

These rigs, however, are only reactivated for signed, multi-year contracts. Rig owners do not have the financial wherewithal to reactivate speculatively, given that costs for such shipyard work is estimated to cost, for example, with a floating rig, anywhere from $50 million to $100 million.

In the interim, as tendering and direct negotiations for offshore rigs continue to surge, especially so with the renewed focus on energy security following the invasion of Ukraine by Russia, rig availability will be squeezed further, and dayrates (which have now reached close to $400,000 per day for 7th generation drillships) have the potential to reach highs not witnessed in almost a decade.

As more of these inactive units enter the fleet – and this will be the case – the committed utilization rate will continue to increase, and dayrates will inevitably follow.