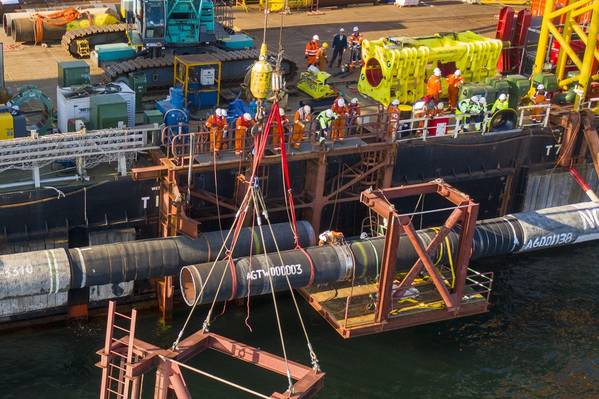 On September 10, 2021, the sections of the second Nord Stream 2 pipeline laid from the German shore and Danish waters was connected in a so-called above water tie-in. The opposing pipe strings were lifted from the seabed by the lay barge Fortuna and the pipe ends were cut and fitted together. The welding to connect the two lines took place on a platform located above the water on the side of the vessel. Then the connected pipeline was lowered to the seabed as one continuous string. ©Nord Stream

The operator of the Russian Nord Stream 2 gas pipeline has registered a subsidiary for the German part of the pipeline to meet German regulatory requirements, it said on Wednesday, though certification for the project still remains suspended by Berlin.

Europe's most divisive energy project, Nord Stream 2 is designed to double the amount of gas flowing from Russia straight to Germany, bypassing traditional transit nation Ukraine, on the bed of the Baltic Sea.

It has faced resistance within the European Union, from the United States as well as Ukraine, on the grounds it increases Europe's energy dependence on Russia and denies Ukraine transit fees, at a time of Moscow's broader standoff with the West.

Nord Stream 2 said the subsidiary, Gas for Europe GmbH, will be headquartered in the Germany city of Schwerin. It will own and operate the 54-kilometer section of the Nord Stream 2 Pipeline located in German territorial waters and the landfall facility in Lubmin as an independent transmission operator, the company said, to comply with German regulations.

The pipeline was built in September but has remained idle since then in expectation of certification by Germany and the European Union.

Germany's Federal Network Agency - which regulates the country's electricity, gas, telecommunications, post and railway sectors - in November suspended a process to certify the pipeline, saying the operator should register a legal entity in Germany.

The regulator said on Wednesday the certification procedure will remain suspended until the transfer of the main assets and human resources to the subsidiary has been completed and the Federal Network Agency will be in a position to check the unit's documents for completeness.

"We currently cannot predict when the procedure will be resumed," it said in a statement.

Uniper, one of the financial backers of Nord Stream 2, expects the pipeline to be available for gas transport from the start of the next winter heating season in October.

Russia has said commissioning the pipeline would alleviate a gas crisis in Europe which saw natural gas prices skyrocketing to all-time highs last month amid tight supplies and an economic recovery from the pandemic.

Some politicians and industry experts in Europe have accused Russia of deliberately limiting flows of gas West in order to speed up the start of gas sales via Nord Stream 2, a charge that Russia denies.