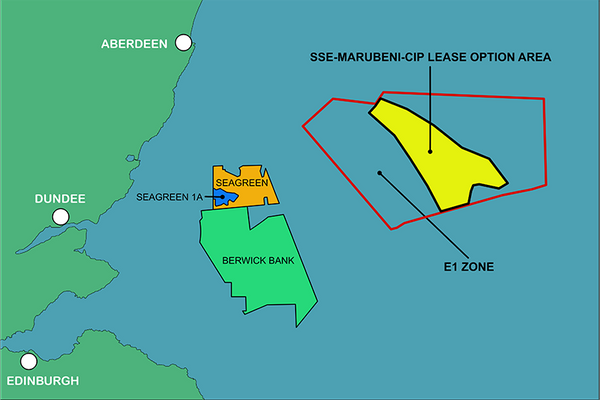 As part of Crown Estate Scotland's ScotWind seabed leasing round, the SSE Renewables-Marubeni-CIP partnership has secured rights to 858 square kilometers of seabed that will support the development of a new giant floating offshore wind farm offshore Scotland.

According to SSE, the 858 sq km offshore lease area is one of the largest awarded by Crown Estate Scotland to any ScotWind bidder.

The seabed is in the E1 Zone in the Firth of Forth off the Angus Coast. It is near to the existing 1.1GW Seagreen offshore wind farm project which SSE Renewables is currently constructing, as well as SSE Renewables’ planned 4.1GW Berwick Bank super-project, which is currently in development.

The lease area has average water depths of 72m, making the site suitable for the deployment of floating offshore wind turbines to deliver up to 2.6GW of new installed capacity – enough to be capable of powering almost 4.3 million Scottish homes and offsetting around 5 million tonnes of harmful carbon emissions each year, SSE said.

When complete, SSE said, the project will become one of the world’s largest floating offshore wind farms.

The consortium will now begin progressing the development of the giant ScotWind project to target first generation before the end of the decade.

"Once operational, the project will significantly contribute to the Scottish Government’s significantly enhanced ambition of delivering around 25GW of next generation offshore wind projects via ScotWind," SSE added.

"Success for SSE Renewables-Marubeni-CIP in the ScotWind leasing round paves the way for the partnership to deliver substantially on economic and social benefits worth billions of pounds for Scotland. This includes the creation of a multi-million-pound supply chain fund to directly invest into Scottish companies and achieve spending of circa 50% in the Scottish economy from the projects over their lifetime as well as supporting the transition of Scottish Oil and Gas sector companies to enter the offshore wind sector. Other Scottish benefits to be delivered include funding for education, skills and community benefit, as well as the delivery of targeted research and employability initiatives in collaboration with the University of Highlands and Islands and other providers. Full details on these initiatives will be announced in the coming months," SSE said.

SSE owns a 40% share of the development rights with Marubeni and CIP each owning 30%.

"The partnership has already invested over £7m in pre-award development of the project. Now, with success in the ScotWind seabed leasing round and subject to signing the lease Option Agreement with Crown Estate Scotland in Spring 2022, the partnership’s project team will be expanded to accelerate project delivery with a view to submitting a timely consent application," SSE said.