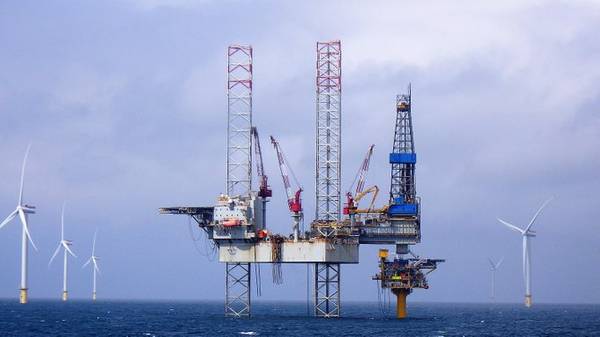 The Noble Hans Deul rig on location over the Blythe platform, with Dudgeon wind farm in the background. (Photo: IOG)

Following Elgood, Blythe is the second development well in IOG's Phase 1 project and is expected to take under three months to drill and complete, after which the rig will move on to Southwark.

The Noble Hans Deul jack-up rig mobilized from the Elgood field location on July 27 and jacked up at the Blythe Platform on July 29. After preparations for drilling the Blythe well spudded at 11 p.m. on August 2.

Andrew Hockey, CEO of IOG, said, "We are pleased to have moved safely over from Elgood to spud the next development well at Blythe, another important step for IOG in delivering our Phase 1 project.

"The Blythe well has been meticulously planned by the IOG drilling, subsurface, subsea and HSE teams in collaboration with our main drilling contractors Noble Corporation, Petrofac and Schlumberger, our Platform Duty Holder ODE Asset Management and our partner CalEnergy Resources (UK) Limited and fully integrates the learnings from the Elgood well.

"We have a very clear collective focus on ensuring safe and efficient performance leading successfully to First Gas in Q4 2021 from the Blythe Hub before continuing into 2022 at Southwark."