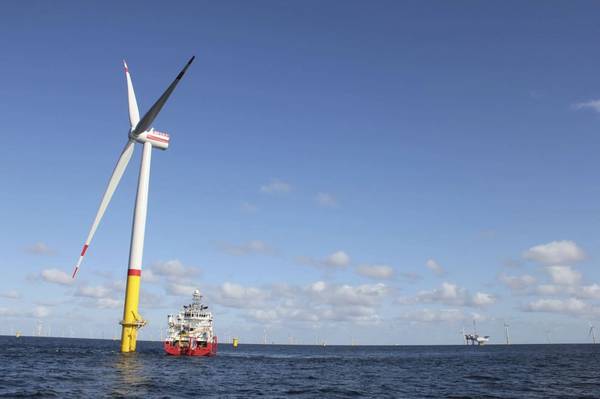 Some oilfield services providers struggling to find work due to the oil industry downturn might replace some of the revenue by providing services in the renewable energy markets. For those in the SURF, maintenance, construction, and installation segments, the opportunities are especially ample, Norway-based energy intelligence firm Rystad Energy said.

"Hit by the Covid-19 downturn, the oilfield service market is not likely to rebound to last year’s activity level until 2023 according to a Rystad Energy analysis. However, suppliers could diversify some oil and gas capabilities and replace up to 40% of 2019’s revenue by servicing the renewable markets," Rystad said.

Rystad Energy analyzed the activity of the top 50 oil and gas suppliers, which together earned $220 billion in upstream revenue in 2019, $100 billion of which originated from well services and commodities.

"Many services provided by well-focused suppliers will be challenging to deploy in the context of energy transition operations, especially fracking services, OCTG, and drilling services and tools. However, the top contractors providing engineering, procurement, construction and installation (EPCI) services – which earned around $55 billion in 2019 from the oil and gas industry – will find it easier to apply their competencies towards the green shift," Rystad said.

“Around $90 billion, or 40% of the revenue from the top 50 players in the global service market, could potentially be replaced by energy transition projects, such as clean energy infrastructure and renewable energy production development services.  However, the supply chain industry must also look to avenues outside of the energy transition to stay afloat,” says Rystad Energy’s Head of Energy Services Research Audun Martinsen.

In terms of market opportunities, Rystad says that most traditional oilfield service suppliers are looking to expand into low carbon segments, meaning technologies or services aiming to reduce or prevent emissions from oil and gas extraction and production. This can be done by offering more efficient operations and digital solutions. This is a space where most suppliers, regardless of current exposure in the service market, have a role to play, Rystad says.

Further, the Norwegian consultancy says that another emerging market within the energy transition is clean energy infrastructure, where suppliers can provide services to support blue and green hydrogen infrastructure, carbon capture and storage, or energy storage in general.

"This is a market where engineering houses, fabricators and equipment manufacturers will find big opportunities for growth and for synergies," Rystad says.

A third option within the energy transition is to supply the end-to-end development and operations of renewable power generation itself, for example by developing solar power plants, offshore and onshore wind farms, and geothermal energy.

"The solar energy supply chain is highly fragmented and has become essentially out-of-box, yet the wind market offers great potential for offshore contractors to support the development of offshore wind," Rystad said.

However, as mentioned before, the risk and investment required for expanding into other energy markets beyond oil and gas will not be feasible for all oilfield service providers.

The installed capacity of all utility-scale global renewable energy assets has doubled every fifth year since 2010, and will total 1000 gigawatts (GWAC) in 2020, comprised of 600 GWAC of onshore wind capacity, 284 GWAC of utility PV capacity and 34 GWAC of offshore capacity.

Due to economies of scale and cost deflation, operators' investment towards asset development will grow slower than capacity, but still much faster than the O&G market.

"In Europe for instance, investments in offshore wind will exceed offshore O&G investment as soon as 2022. Geothermal energy is also getting broader attention in the market, especially in Europe," Rystad says. 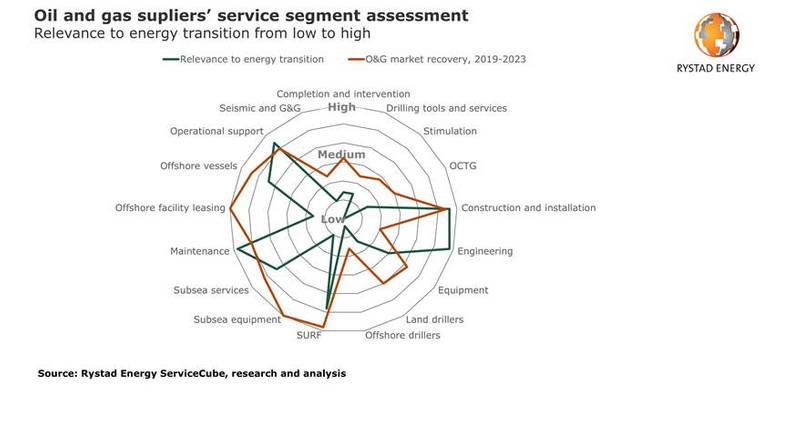 Rystad Energy has mapped out the relevance of existing oilfield service business offerings in the context of emerging energy transition markets.

"Within the scope of our analysis, we see that those oil and gas segments which will return to 2019 market levels by 2023 are those that are most agile – those that are able to support both the diversification of O&G offerings towards the energy transition, and at the same time, those that will continue to see high growth from traditional O&G operations," Rystad says.

The SURF, and the maintenance, construction, and installation segments rise to the top in this regard, emerging as the most nimble service segments.

SURF represents the market for subsea cables and pipelines, and the installation of these mechanisms. As a key segment for the development of deepwater oil and gas operations, particularly the high growth markets of Brazil and Guyana, Rystad Energy believes the SURF segment will be on track to surpass 2019 market levels in 2023. In addition, SURF services will be in demand for both floating and grounded offshore wind – the fastest growing renewable energy segment, Rystad adds.

Similarly, the skillset of the maintenance, construction, and installation segment is applicable to the emerging energy infrastructure market and to renewable energy production in general. This segment is also expected to win big in as the oil and gas market recovers, as the segment has a major focus on LNG development, which many E&Ps have favored in recent years.

No room for rigs in energy transition?

"The energy transition is likely to be more challenging for well-related services, such as rigs and well services, even though geothermal energy – a potential consumer of these services – is gaining momentum around the world. Geothermal projects typically are comprised of two to six wells per project. However, the 1,000 geothermal wells which might be drilled every year going forward will not be sufficient to compensate for falling O&G well services demand, which we anticipate will only decline from a high of the 70,000 oil and gas wells drilled last year," Rystad said.

Therefore, Rystad says, the sectors that are, by nature, less agile in shifting towards the green revolution would be wise to focus on reducing emissions by way of digitalization and by developing automation and emissions control technologies.s