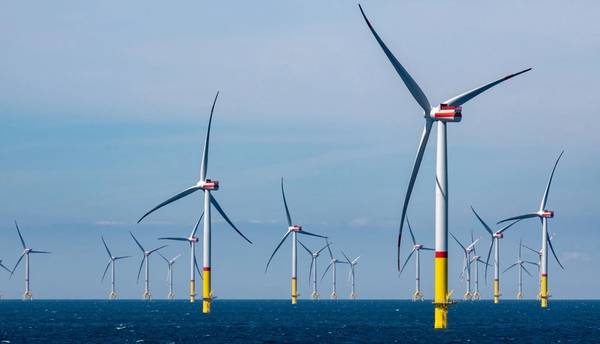 For illustration; Image by agrarmotive/AdobeStock

Asia’s pathway to a low carbon future is challenging. Coal dominates in the key markets of China and India, gas is central to the power sectors of Japan and South Korea.

Meanwhile, much of the technology needed to really push the region’s energy transition out of the starting blocks is nascent and expensive. Deep decarbonization feels a distant aspiration.

But despite the obstacles, there is hope. Offshore wind offers enormous potential for Asia and investment is underway. My colleagues in our APAC Power and Renewables team have identified almost 1,500 GW of technical offshore wind potential in Asia, much of it in China, Japan, Taiwan, South Korea, and Vietnam.

As power markets are slowly liberalized across Northeast Asia, there is growing commercial demand for renewables as costs continue to decline and governments seek to attract investment.

Yet today in these markets only 0.4% of the total offshore wind potential is operational. This percentage will rise, but only slowly. By 2030, we expect around 5% of potential capacity will be in place, with new annual offshore growth in Asia doubling from 4 GW a year to over 9 GW a year. Europe’s offshore wind capacity will grow faster, despite its total generation capacity being only a third of Asia’s by 2030.

Much still needs to be done. Costs still need to come down by half if offshore wind is to be competitive with fossil fuels and increasing competition from other renewables such as onshore wind and solar PV. In addition, ambitious offshore wind targets will be tough to meet without sustained government support.

Costs will continue to fall with technology and scaling - average global offshore wind generation cost will be halved by 2028 - but without a clear route-to-market that requires policy and financial support from governments, developers will be hesitant to invest in offshore wind.

Unsurprisingly, China is Asia’s largest offshore wind market today, with the strongest pipeline of future projects. We now expect 38 GW of new added offshore wind capacity to come online in China by 2029. And while China has no official target beyond 2020, its project pipeline will support offshore wind growth in the long-term. I’m keen to see how the upcoming 14th five-year plan will tackle offshore wind.

Challenges still need to be overcome. The government plans to remove current subsidies by the end of 2021, slowing the rate of growth over the next five years while costs remain relatively high. Through the short term we will see record new offshore installations (up to 5 GW) as developers race to complete projects before feed-in tariffs expire next year. Thereafter the pace of growth is likely to slow as China offshore wind needs up to US$32/MWh of subsidy to support new capacity additions from 2022 to 2025. Falling costs should see wind competing without subsidy by 2028.

Looking across the rest of Asia, future growth targets are ambitious: excluding China, the region aims to add a further 54 GW of wind by 2030. But is enough government support in place to achieve this? Supportive policy has been critical to Europe’s burgeoning offshore wind sector as governments incentivized offshore investment beginning more than a decade ago.

Some markets are taking the lead. Taiwan is leading the pack, having approved 5.7GW of projects by 2025. India has ambitious plans, but how much will get built? Japan and Australia don’t even have national offshore wind targets, though the industry is lobbying for growth. 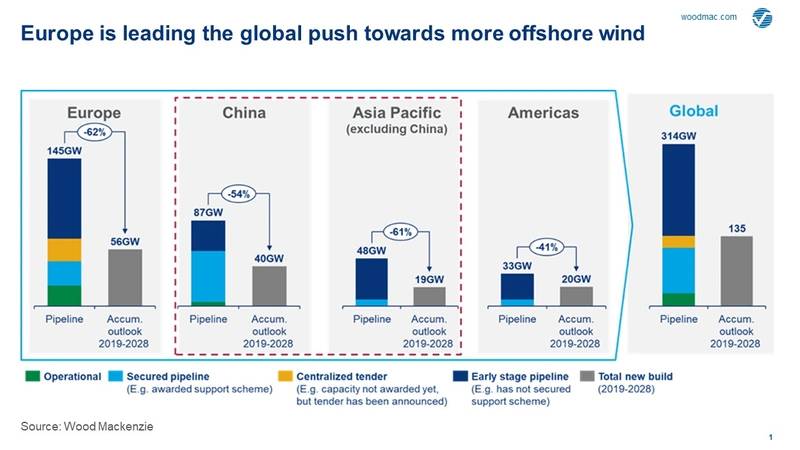 The opportunities for business to prosper through the growth of the offshore wind sector is not limited to capacity investments. Supply chains are a critical part of the sector and are experiencing huge growth. Original equipment manufacturers (OEMs) are pushing the boundaries of what offshore wind can deliver. Turbines are getting bigger and more efficient, driving output increases at lower unit costs. Mainstream offshore turbines that were 6-8MW a few years ago are now being replaced by next-generation 10-12MW rated machines.

We estimate the offshore turbine supply chain, for example, presents over US$200 billion of opportunity in the next decade globally. Offshore growth in Asia offers scope for turbine supply chain localisation in those markets. The supply of key components has seen a consistent shift towards Asian markets over the past decade. Chinese OEMs dominate the domestic markets, although western OEMs have achieved success in other countries in Asia.

The ambitious targets for offshore wind in many Asian markets provide a glimpse at how the region will move towards a lower carbon future. The sector will also create new opportunities for energy companies, supply chain manufacturers and investors. But this will need support. As with all aspects of the energy transition, government intervention and policy are critical to long-term success. 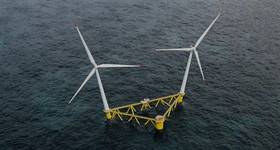