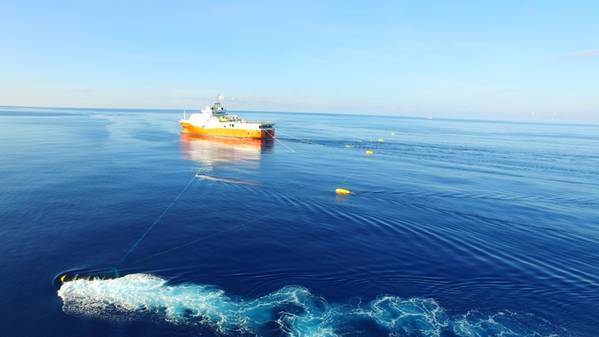 Malaysia called on Thursday for disputes over the South China Sea to be resolved by peaceful means, amid a standoff between Chinese and Malaysian vessels that a U.S. think tank said had been going on for months.

U.S. and Australian warships arrived in the South China Sea this week near an area where a Chinese government survey vessel, the Haiyang Dizhi 8, has been operating close to a drillship under contract to Malaysian state oil company Petronas, regional security sources have said.

The standoff was the latest development in a series of targeted harassments by Chinese vessels of drilling operations in five oil blocks off the Malaysian coast in the past year, said Greg Poling, director of the Washington-based Asia Maritime Transparency Initiative (AMTI).

On Thursday, the Haiyang Dizhi 8 was still within Malaysia's EEZ, about 337 kilometers (209.4 miles) off Borneo, data from ship tracking website Marine Traffic Showed.

Three U.S. warships and an Australian frigate conducted a joint exercise in the South China Sea this week, near the site of the West Capella's operations, officials and security sources have said.

China has denied reports of a standoff, saying the Haiyang Dizhi 8 was carrying out normal activities.

Malaysia said on Thursday it remained committed to safeguarding its interests in the South China Sea.

"While international law guarantees the freedom of navigation, the presence of warships and vessels in the South China Sea has the potential to increase tensions that in turn may result in miscalculations which may affect peace, security, and stability in the region," Foreign Minister Hishammuddin Hussein said in his first official remarks on the standoff.

Hishammuddin said Malaysia maintained "open and continuous communication" with all relevant parties, including China and the United States.

Separately, Taiwan's Defence Ministry said that a Chinese aircraft carrier group lead by China's first aircraft carrier, the Liaoning, had ended a mission in the South China Sea on Wednesday and was now heading east through the Bashi Channel, which separates Taiwan from the Philippines.

The carrier group earlier this month sailed down Taiwan's east coast. China said at the time it was on its way to routine exercises in the South China Sea.