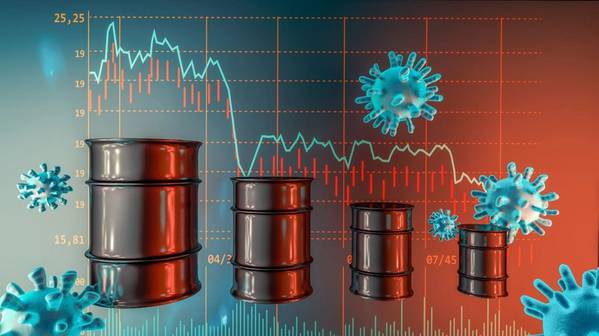 Imagine for a moment that the Organization of the Petroleum Exporting Countries (OPEC) and Russia had agreed at the start of this month to extend and deepen their crude oil output cuts. It wouldn't have made the blindest bit of difference.

While it was only three and half weeks ago, though it feels as long as a lifetime, the collapse of the deal between OPEC and allies, including Russia, to limit output is no longer relevant in a world devastated by coronavirus.

If OPEC and its allies, known as OPEC+, had agreed to extend the 2.1 million barrels per day (bpd) and add a further 1.5 million bpd, there is little doubt crude prices wouldn't have crashed as they did in the wake of the breakdown of the talks, and the subsequent move by top exporter Saudi Arabia to flood the market.

But the rapid spread of the coronavirus beyond its origin in China to most of the populated world, including the major crude demand centers of Europe and North America, means that the current price slump was inevitable, as the scale of the loss of global demand would have simply overwhelmed the OPEC+ output deal, assuming it had been extended and increased.

This means that the moves by Russia to try and revive a deal with the Saudis and pressure from some U.S. senators to try and force action to control supply are largely meaningless, and perhaps a signal that the authors of these plans have failed to grasp the extent of the reality of the global economic fallout from the virus.

Even if Saudi Arabia, Russia and the United States, the three largest oil producers, acted in concert, it's unlikely that they would be able to reverse the current price slide.

Brent crude futures dropped as low as $23.03 a barrel in early Asian trade on Monday, the weakest in 18 years and 68% below the peak so far in 2020 of $71.75 on Jan. 8, reached just as the coronavirus was starting to spread in its origin city of Wuhan.

It may be that even a drop of 20 million bpd is too conservative, given the extent to which aviation and personal transport has been curtailed across much of the populated world.

With the Saudis boosting crude exports by around 2.6 million bpd in April from January levels, and other producers, including Russia, also adding barrels to the market, the focus has correctly been on where all this extra crude is going to go.

Global storage is limited and at the current rate of oversupply is likely to be full within a matter of months.

Also, with demand being crunched, refiners are already cutting back on crude purchases, no matter how cheap oil is.

India's Reliance Industries, which operates two refineries with a combined capacity of 1.2 million bpd, is offering spot cargoes for April, a rare move that underscores the extent of the loss of demand in India, Asia's second-biggest crude importer after China.

Even China may soon lose its ability to soak up additional crude as it runs out of available storage and domestic demand remains soft while the country recovers from the coronavirus and confronts the new reality of weaker global demand for its manufacturing and other exports.

Overall, the crude oil market is actually working fairly well, insofar as a massive supply glut is collapsing prices, and ultimately output will have to fall to meet available demand.

The problem is nobody wants to be the producer who stops work, meaning even loss-making output may continue for some time, but eventually high-cost companies with weak balance sheets will be forced to the wall.

While efforts such as the administration of U.S. President Donald Trump planning to send a special energy envoy to Saudi Arabia to work on stabilizing global crude markets will give energy journalists something to write about, for the moment the efforts are likely to be as successful as whistling against the wind.

(The opinions expressed here are those of the author, a columnist for Reuters; Editing by Christian Schmollinger)