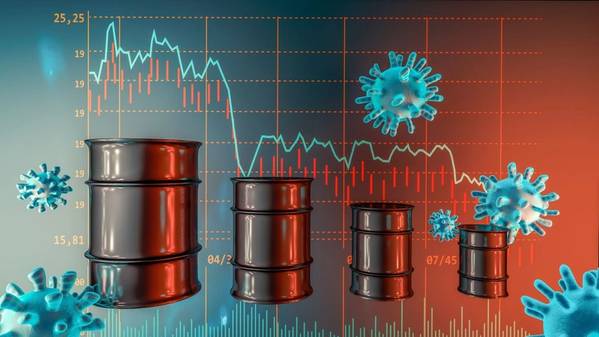 Oil markets received a lift from the U.S. stimulus chatter, but for the most part activity remains rudderless, awash in a sea of oil, - Illustration by OOSORIOartist - AdobeStock

"Oil markets received a lift from the U.S. stimulus chatter, but for the most part activity remains rudderless, awash in a sea of oil," Stephen Innes, market strategist at AxiTrader, said.

The U.S. Senate on Wednesday overwhelmingly backed a $2 trillion bill aimed at helping unemployed workers and industries hurt by the coronavirus epidemic.

But with demand disappearing and output rising, the outlook is bleak.

Goldman Sachs forecast global oil demand, which stood at around 100 million barrels per day (bpd) last year, will fall by 10.5 million bpd in March and 18.7 million bpd in April. For the year, oil consumption is expected to contract by around 4.25 million bpd, the Wall Street bank said.

"Global isolation measures are leading to an unprecedented collapse in oil demand," it said.

The weakening demand will lead oil refineries to cut processing rates and drive a rise in inventories, which in turn will increase pressure on crude prices that Goldman expects will remain near $20 a barrel in the second quarter.

At the same time, the collapse of a supply-cut pact between the Organization of the Petroleum Exporting Countries and other producers led by Russia, known as OPEC+, is set to boost oil supply, with Saudi Arabia planning to ship more than 10 million bpd from May.

Oil stocks are already rising with tanks around the world filling fast despite a 50%-100% jump in leasing costs.

Efforts by the United States to persuade Saudi Arabia to limit supplies as its shale oil industry struggles with the price collapse were unlikely to have much effect on, Dutch bank ING said.

"Even if we do see some restraint from the Saudis, the world is still set to see a significant oil surplus over 2Q20, given the demand hit we are currently seeing. This suggests that any potential action would likely only stabilize prices, rather than push the market significantly higher."

(Additional reporting by Roslan Khasawneh in SINGAPORE and Sonali Paul in MELBOURNE; editing by Richard Pullin and Barbara Lewis)