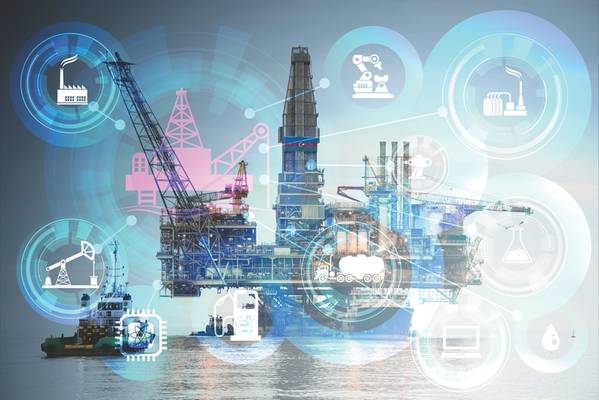 The size of the prize of so-called digitalization technologies is enormous. How much is reality and how much is hype?

UK-based analyst firm Wood Mackenzie asked this very question. The results are perhaps not that surprising.

“Size of prize is enormous; (improved) HSE (health safety and environment), cost saving and value increases in assets and companies,” he says. Wood Mackenzie has, in an October 2019 report, estimated $40 billion could be saved in operating costs in the upstream (on and offshore) industry – per year (of a total $356 billion in 2018).

“But, how much of this is talk, how much is noise versus results being delivered? We think there’s a lot of hype; a lot of proof of concept and trial. What are companies doing? They are talking about it.”

Wood Mackenzie has been tracking mentions of digitalization in company earnings and analyst calls. Kelly says 2016-17 was an inflexion point, with the number of super majors talking about digitalization in earnings close and management days taking a significant jump, dominated by BP and Shell, initially, with Equinor and Total joining in to a large degree in 2018 and then ExxonMobil becoming more vocal in 2019. “And we expect more than last year,” says Kelly.

He gives examples, such as Suncor talking about data and data cleansing, activities that will take a while to follow through, and Chevron talking about the potential of digital being enormous, but not putting number on it. “There are few specifics on the benefits,” says Kelly.

One that has offered some detail is Norway’s Aker BP, that calls itself a technology company that happens to produce oil. Aker BP says its reduced time spent on routine operations by around 75%, cutting forecast 2020 opex by about 15% or $150 million, says Wood Mackenzie’s report. When it comes to the project development side, it’s less easy to get fast results, however.

Indeed, a large focus of what’s being done at the moment is in operations, “where there are myriad work processes where industry can deploy technology to deliver work in more effective, cheaper, safer ways, and get real-time feedback loops,” he says. “You can make a change and get results instantly.”

But, overall there are very few examples digital technology being disclosed openly, says Kelly. “We think it’s because the industry is finding digital transformation at scale harder than they first thought. We are seeing some proof of concept, but it’s not coming through at scale yet. The industry has set that use of digital as a priority. At senior level digital is being talked about as strategic.

“Industry is only using 3-5% of all data it has at its disposal. There’s almost too much data and that causes lack of focus; they’re not sure where to spend and their money on the data front. Because of that, we not seeing successful trials at scale. Cultural buy-in, the buy-in to really make this change happen is still question mark.”

Indeed, speaking at the same event, Justin Rounce, EVP and CTO at TechnipFMC, says, “One of problems I have is the big data challenge. It’s hard to do.” While someone like YouTube handles unbelievable amounts of data, “their data challenge is completely different to anything we face,” says Rounce. “They get about 300 hours of video uploaded every minute.” While there are companies like Microsoft, Amazon, and Google that provide the infrastructure to load and manage data, it’s still not easy for oil and gas. “We have challenges around different standards and types of data and a significant volume of unstructured data.”

There are opportunities, however, he says. AI and machine learning lend themselves well to unstructured data. Progress is being made in subsurface modeling and also in drilling and field development, helping to push learnings from offset wells into future planned wells.

There are also off-the-shelf technologies available. Predictive analytics at component and system levels can be used, to see when to maintain equipment – or, equally as important, when you don’t need to – and to better understand flow assurance, production optimization and to prevent problems.

Another area of opportunity is the digital twin, he says. But, just as lack of standardization in documentation and records has led to unstructured data and different digital twins are being created, he points out, which will cause problems when it comes to future interoperability or scalability, he says. “So, how about an open system where system data from different sources can be pulled in and interface with as many standards as possible? Time will tell.”

There are positive steps. The UK’s regulator, the Oil & Gas Authority, produced a Digital Strategy 2020-2025, late last year, aiming to embed “digital excellence”. The move was welcomed by Oil & Gas UK, an industry body, which said “effective use of data and digital tools will be critical to unlocking a safe and competitive oil and gas industry working to realize its full potential.”

But, as has been found, with UKOilandGasData, a well and seismic data sharing platform built by Oil & Gas UK’s CDA (Comon Data Access) subsidiary, which provided the foundations on which the OGA’s UK National Data Repository was built, the hardest bit is getting operators to submit data in a common format that is also able to be machine readable and therefore digitally accessible. The OGA’s latest initiative will hope to change that.