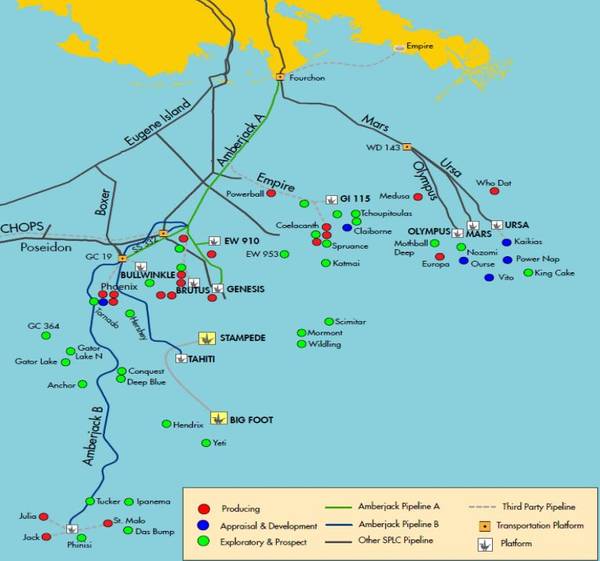 Shell Midstream Partners LP expects to take final investment decisions on expanding its Mars crude oil pipeline system in the Gulf of Mexico in the first half of the year, Chief Executive Kevin Nichols said on Thursday.

Shell has seen significant interest from oil producers as the 600,000 barrel-per-day system nears capacity, and the company is working towards finalizing agreements with them for additional capacity on the system, executives said in a conference call with analysts.

"Our outlook, as always, on the Gulf of Mexico remains bullish," Nichols said. Production in the area has grown 9% year-over-year, and is up over 57% since 2014, Nichols said.

The company does not want to comment on the specifics of expected added capacity or what it would spend on the project on the Mars corridor, a 163-mile (260-km) crude oil pipeline originating approximately 130 miles offshore in the Gulf of Mexico. It transports crude from the Mississippi Canyon-area to Clovelly, Louisiana.

"When we get to the point of definitive agreements and bringing it online, which is estimated around mid-2021, we'll give guidance in customary fashion at that point," said Steven Ledbetter, vice president of commercial for Shell Midstream, said.

Shell also said Amberjack Pipeline Co has signed a dedication and connection agreement with Chevron Corp's (CVX.N> Gulf of Mexico anchor project, which is expected to produce oil in 2024.

The project is expected to open up 75,000 bpd of crude oil production, which will be transported on the Amberjack pipeline. Amberjack Pipeline Co is a joint venture between Shell Midstream Partners and Chevron Pipe Line Company.

The Amberjack pipeline system can carry about 350,000 bpd from the U.S. Gulf of Mexico to refiners in Texas and Louisiana.