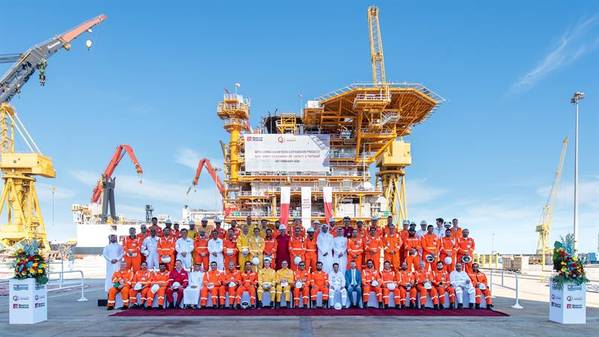 Qatargas has this week celebrated the completion and the sail away of the offshore living quarters structure, part of its North Field Bravo (NFB) Living Quarters Expansion (LQX) project.

The structure was completed by Nakilat-Keppel Offshore Marine (N-KOM) at the Erhama Bin Jaber Al Jalahma Shipyard. This is, according to Qatargas, a significant milestone for Qatar, its the first time "that a major offshore living quarters structure has been entirely fabricated at a local yard in the country."

"This aligns with Qatargas' commitment to Tawteen, the supply chain localization program initiated by Qatar Petroleum for the energy sector," Qatargas said.

Qatargas organized the sail-away ceremony for the jacket and topside of the structure at Ras Laffan.

Speaking at the ceremony, Khalid bin Khalifa Al Thani, Chief Executive Officer, Qatargas, said:  “This project is a historic milestone for the State of Qatar as it highlights a new and important capability. It is for the first time that the fabrication of a major offshore structure of this magnitude has been completed in a Qatari yard. This achievement showcases the capabilities, skills, and resources which are available locally at the Erhama Bin Jaber Al Jalahma Shipyard for the fabrication of large and complex offshore structures."

Italy's Rosetti Marino undertook engineering designs for the project in Italy. All the fabrication work was undertaken by N-KOM at the Erhama Bin Jaber Al Jalahma Shipyard at Ras Laffan Port.

The project provides for additional living quarters which will increase the capacity of the NFB Offshore Living Quarters by 90 workers on board. When fully installed, this will allow for the catering of additional operational requirements.

Qatargas said that the next major milestone of the project is the safe transportation and installation of the 5000 tonnes of structure to offshore NFB in February 2020. The loadout, sail away and installation activities will be carried out by subcontractor Heerema using their heavy lift vessel 'Aegir'.

The original NFB accommodation, installed in 1995, was designed for the operational needs of Qatargas Trains 1 and 2.