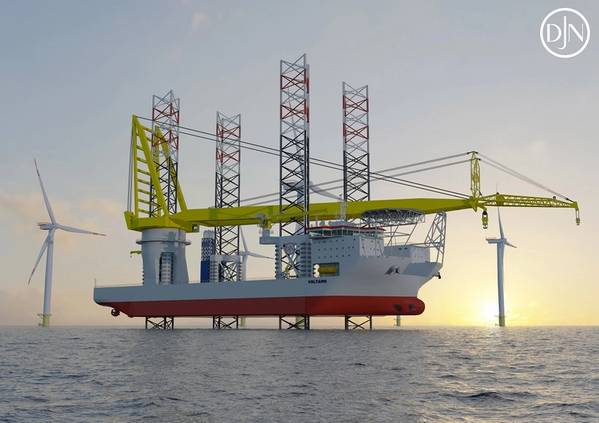 Jan De Nul Group’s new Offshore Jack-Up Installation Vessel (JUV) Voltaire – built at COSCO Shipyard in Qidong, China, and set set to be delivered in 2022 – will be powered by propulsion solutions from SCHOTTEL.

The four rudderpropellers and two transverse thrusters provided by SCHOTTEL are part of the vessel’s thruster setup which will ensure optimal propulsion efficiency as well as maximum maneuverability. With a payload of approximately 14,000 metric tons and a crane capacity of over 3,000 metric tons, the JUV will be able to support the renewable energy industry in building future wind farms at sea.

Philippe Hutse, Offshore Director at Jan De Nul Group, said, “Upon delivery of the JUV in 2022, we will be capable of efficiently installing the next generation of offshore wind turbine generators and foundations. As we move toward this, SCHOTTEL’s crucial expertise is of great advantage.”

The propulsion system of the JUV is powered by electric motors driving the SCHOTTEL azimuth thrusters. Four SCHOTTEL Rudderpropellers type SRP 610 FP with an input power of 3,000 kilowatts each and a propeller diameter of 3.3 meters are installed at the stern. When combined with the forward thruster setup, which includes two SCHOTTEL Transverse Thrusters type STT 7 FP (2,600 kilowatts each and a propeller diameter of 2.8 meters), the result is optimal maneuverability and full dynamic positioning to DP 2 standards. The “Voltaire” will also be able to achieve a maximum speed of 11.5 knots.

The new JUV will also be environmentally compliant thanks to the on-board integration of the same advanced emission control technology found on all other ultra-low emission vessels in the Jan De Nul fleet. In this respect, the latest vessel will be equipped with the patented and DNV-GL type-approved SCHOTTEL LEACON system. This system complies with VGP regulations and is considered to be a non-oil-to-water interface. Due to separate seals on the seawater side and on the gearbox side, the sealing system ensures that, in case of leakage, seawater entering the system or gear oil escaping from the system are collected in an intermediate chamber. This prevents water from entering the gearbox and, of even greater importance, oil from escaping into the seawater.

The 169.3-meter-long and 60-meter-wide Voltaire is designed to transport, lift and install offshore wind turbines, transition pieces and foundations. Key features of the vessel include a main crane of over 3,000 metric tons, an operating depth of approximately 80 meters, a payload of about 14,000 metric tons and accommodation for 110 persons. Beyond this, Voltaire has four legs to lift itself above sea level for stable working conditions.

Compared to Jan De Nul Group’s two other jack-up vessels, Vole au Vent and Taillevent, this new vessel stands out with almost double the deck space. That enables the Luxembourg-based company to handle the bigger turbines and foundations, but also to optimize installations at sea and to lower fuel consumption and emissions. The JUV will also be deployable for the oil and gas industry as well as for the decommissioning of offshore structures.