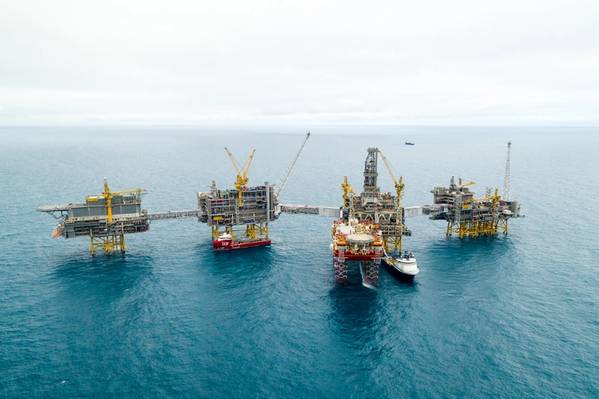 The mega Johan Sverdrup oil field has already achieved a daily production above 200,000 barrels, and will have a capacity of well above 300,000 barrels by the end of November. (Photo: Espen Rønnevik/Øyvind Gravås, Equinor)

Equinor's third-quarter profit fell by more than expected on Thursday after a significant decline in the volume and price of natural gas sold to Europe, although the Norwegian firm reiterated its forecast for flat 2019 production.

Shares in Oslo-listed Equinor were up 2.2% by 0730 GMT after it also confirmed plans to reach Phase 1 plateau output of 440,000 barrels at its giant Johan Sverdrup oil field by summer 2020 after new wells are drilled.

Equinor's Sverdrup oil field, which only started in early October, has already achieved a daily production above 200,000 barrels, and will have a capacity of well above 300,000 barrels by the end of November.

"The most interesting piece of information in the Q3 report, was probably that Sverdrup now is producing above 200,000 boepd, which implies 2-4% earnings-per-share potential to 2019-2020 estimates," Teodor Sveen-Nilsen at Sparebank 1 Markets said.

Equinor's adjusted earnings before interest and tax (EBIT) fell to $2.59 billion in the third quarter from $4.84 billion during the same period in 2018. A poll of 23 analysts compiled by Equinor forecast adjusted EBIT of $2.69 billion.

"We maintain strong cost and capital discipline, but our results are affected by lower commodity prices in the quarter. In addition, we have decided to use our flexibility to defer gas production to periods with higher expected prices," Equinor's Chief Executive Eldar Saetre said.

Norway is Europe's second largest gas supplier after Russia, with Equinor accounting to the bulk of sales, which also includes volumes owned by the Norwegian state.

Equinor's total equity oil and gas production was 1.9 million barrels of oil equivalent per day in the third quarter, down 8% from the same period in 2018.

Gas production off Norway alone fell by 17%, while average invoiced European gas prices were down 26%.

Cautious on shale
Equinor had made impairment charges of $2.79 billion, with $2.24 billion related to its onshore shale oil and gas assets in North America on "more cautious price assumptions".

The impairments also included $206 million for repair costs and loss of revenue during repairs at its Bahamas oil terminal damaged by Hurricane Dorian in September.

Equinor said earlier in October that is had managed to recover from the ground about a third of around 119,000 barrels of oil spilled when the hurricane ripped the roof of several tanks at its South Riding terminal.

In addition to the impairment, the results were impacted by the oil clean up and an onerous transportation contract costs of a total $537 million, of which the most significant part was provided for, Equinor said.