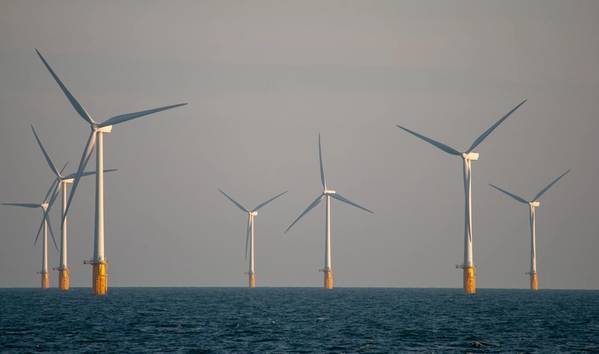 Eight competitive lease sales for offshore wind acreage have generated almost half a billion in revenue for the U.S. federal treasury. A dozen official leases have been awarded, with three more to be awarded following anti-competitive review on the heels the sale of three leases offshore Massachusetts in mid-December.

Approximately 1.4 million offshore acres are under lease, and following the award of the Massachusetts leases that number will jump up to nearly 2 million. Two construction and operations plans are under consideration, and seven site assessments are underway.

For Jim Bennett, chief of the Office of Renewable Energy Programs for the Bureau of Ocean Energy Management, this signals a healthy start for an offshore renewables program that is scarcely a decade old.

The eighth lease sale for acreage offshore Massachusetts, concluded December 14, 2018, drew winning bids of $135 million from each of three companies. Equinor Wind U.S. bid on OCS-A-0520, Mayflower Wind Energy on OCS-A-0521, and Vineyard Wind on OCS-A-055. Combined, the bids on the three lease sites total $405 million, but the Department of Justice and Federal Trade Commission will conduct an anti-competitiveness review, lasting up to 30 days, before the apparent high bidders are awarded the leases. If fully developed, the trio of areas could support 4.1 gigawatts of commercial wind generation.

“It was great in terms of revenue, but it makes a huge statement about the industry coming of age, and being ready to be very active,” Bennett said.

In 2009 the Department of the Interior laid out the process for the BOEM to follow in leasing and approving wind projects on the U.S. Outer Continental Shelf. Since, BOEM has worked with 14 intergovernmental task forces and stakeholders to identify appropriate areas to lease offshore each state.

Such locations, Bennett says, are those with strong wind resources, buildable locations with a shallow sloping shelf, and proximity to markets. Further, he adds, these locations must not conflict with already established other uses of the ocean, such as navigation, commercial fisheries and Department of Defense activities.

The strongest wind resources are primarily along the U.S. East Coast, and that part of the country has seen the most activity to date, he says. Construction and operations plans for Vineyard Wind’s eponymous project, to be located 14 miles south of Martha’s Vineyard, and Deepwater Wind’s South Fork project 35 miles east of Montauk Point, are both under review with BOEM. 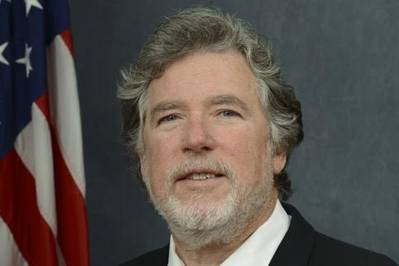 Jim Bennet, chief of the Office of Renewable Energy Programs for the Bureau of Ocean Energy Management (Photo: BOEM)

“We anticipate steel in the water by 2020,” Bennett says, noting he anticipates receiving three or more construction and operations plans in the next few years. “We’re looking at maybe a dozen commercial-scale [projects] being built in the 2020s on the East Coast.”

In addition, the agency is considering additional leasing opportunities, particular offshore New York and New Jersey where there is particular high demand, and the Carolinas.

The West and Gulf Coasts have lower-rated winds that Bennett believes will be harnessed over the longer term.

Off of the West Coast and Hawaii, there are calls out for several areas, he says, and he anticipates “in just a few years” that activities on the West Coast will follow those of the East Coast.

"This offshore wind energy program is not your father’s wind program. It’s coming of age,” Bennett says. “The markets have indicated they are going to invest in it in a major way. It’s not just something far out in the distance. It’s coming in a big way.” 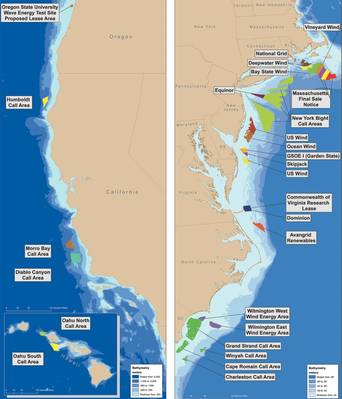 Map of all the renewables leasing areas offshore the United States (Source: BOEM) 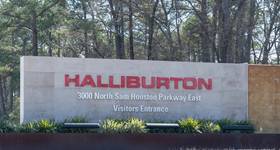