For the project in Norway, NKT has developed a dynamic 1 kV cable as well as a semi-dynamic 24 kV export cable for power export.

The cables are currently being tested in a pilot project in northwest Norway in collaboration with Swedish company Waves4Power, which has developed the purpose-built wave power system

The wave power system started delivering power to the Norwegian land-based power grid on 2 June 2017 when the 24 kV semi-dynamic export cable was connected.

The cables are also being tested in cooperation with Chalmers University of Technology in the high voltage test centre at RISE institute of Sweden.

One of the main challenges for wave power devices is the harsh ocean environment they sit in. For NKT the flexibility and endurance of the wave power cables have been a key focus in the cable development process.

"The new 1 kV cable is extremely dynamic and can withstand the constant bending produced by the wave movement, and it has been designed based on our experience with industrial and universal cables," says Frida Norrbom Sams, Executive Vice President and Head of Applications covering low- and medium voltage cables in NKT. "The core of the cable has three copper conductors and a very low mechanical friction. Unlike a normal offshore cable, it does not have an armoured sheath but is reinforced with aramid yarn which makes it very tough and flexible."

Waves4Power's system is being developed in cooperation with partners including NKT, Siemens, Jotun, Parker and Petronas.

The wave power system is based on a buoy with a piston that generates energy from the movement of the waves.

Energy is transmitted from the buoy to a collection hub by a 1 kV cable from NKT. There, a transformer increases the voltage level to 22 kV so it is ready for the local power grid via a 24 kV semi-dynamic export cable.

The pilot project in Norway was formally launched in September 2017. 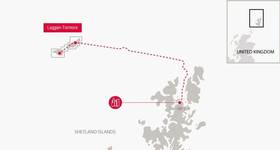