Trilateral cooperation between the US, Canada, and Mexico is needed, says US Energy Secretary Rick Perry.

Perry was speaking at the University of Houston’s Hilton Hotel at a North American Ministerial event on 14 November, which included Canada’s Minister of Natural Resources Jim Carr, and Mexican Energy Secretary Pedro Joaquín Coldwell. Perry identified three areas of possible collaboration such as infrastructure, technology and security of energy assets.

Cyber security was called out specifically as a huge topic of interest between the three countries.

Coldwell said that the Mexican energy reform provides an opportunity to work with the US and Canada on issues such as trade, infrastructure, investments, information, technological innovation, talent development and energy reliability.

As far as the meeting among the three energy secretaries, Coldwell commented that, “the future is very positive.”

For those who worry about the outcome of current NAFTA (North American Free Trade Agreement) negotiations and how it could affect ongoing partnerships and investment with Canada and Mexico, Perry painted the process with a positive brush.

“The renegotiation of NAFTA is a heathy process,” Perry said. “Competition is a good thing. Our counterparts in Canada and Mexico are renegotiating a 20+ year-old agreement, and particularly with the changes we have seen in this region... Fifteen years ago they told us we had found all the oil and gas there was to find... and that's not the case. Does it make sense to sit down and renegotiate a new North American trade agreement? Yes, I think it does. But that we wouldn’t find a deal? That’s really far-fetched.”

Following the event, Coldwell discussed with OE the potential surrounding Mexico’s anticipated second deepwater round this coming January, which also includes an opportunity to partner with Pemex on the Nobilis-Maximino farm-out.

“We are seeing very high interest in the round this January,” Coldwell said to OE through an interpreter. “There are 29 companies are registered for the bid round, including 16 operators, and 13 as financial partners.

“The farm-out (Nobilis-Maximino), it has an even higher interest than Trion. We are also very confident that it will be allocated during the auction in January,” Coldwell concluded. 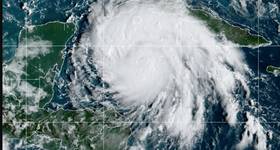