Shell described the sailaway as a "significant milestone" for the project, the first production expected in 2018.

The huge vessel, built by the Technip Samsung consortium, has an arrival date of 30 July for its destination, 5800km away, in the Browse Basin, in about 250m water depth, offshore Australia, according to vessel tracking websites.

The vessel, which will be stationed 475km North-North East of Broome, will have a capacity of at least 5.3 MTPA of liquids: 3.6 MTPA of LNG, 1.3 MTPA of condensate and 0.4 MTPA of liquefied petroleum gas.

The Prelude FLNG facility will be moored near to the Prelude field in 250m water depth, using four groups of pre-laid mooring chains. Each mooring chain will be held to the sea floor by piles.

The facility has been designed to withstand severe weather, including up to a "10,000-year" storm, and will remain onsite during all conditions. Seven production wells will feed gas and condensate from the reservoirs via four flexible risers into the facility. All subsea connections join the facility via the turret.

The turret’s swivel design enables the facility to pivot according to wind and sea conditions while it remains fixed to the sea floor.

A team of between 120-140 people will work on board Prelude during operations.

Asset integrity from the start 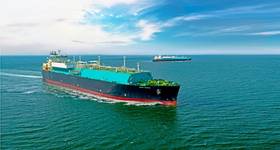