A competition to develop an offshore autonomous robot has helped iron out some of the issues that will need resolving to take this technology offshore. Elaine Maslin reports.

While we’re not quite at the so-called Singularity, when super-intelligent computers outrun their human masters’ ability to control them, the introduction of robots into the offshore oil and gas industry is looking like an ever more realistic prospect.

Be it for assessing inside confined spaces (which require a shut-in for humans to enter), operating in hazardous areas or to simply reduce manning levels, robotics has become high on the agenda for many operators.

Total has just completed its Argos (Autonomous Robot for Gas and Oil Sites) Challenge, in Lacq, France, which saw five teams pitch their robotic creations against a string of tasks on a mock-platform site. It was the third and final round of the competition, which has been getting progressively harder.

Total’s aim was for a robot, able to detect and control leaks, weighing less than 100kg, which can move between floors, and on different types of flooring, from grating and corrugated iron to cement and wet slippery surfaces, under its own power. It should have remote control functionality, be ATEX/IECEx compliant with a technology readiness level 5, and be a fully autonomous robot.

The winner was announced May 17. Find out more here

However, the competition, run with the French National Research Agency (ANR), has helped Total better understand the solutions it needs, including that it could be better to have multiple simpler robots, working together, than a single multi-tasking unit, says Kris Kydd, head of prospective lab robotics at the R&D department of Total Exploration and Production, based in Pau, France. Kydd was speaking at the ITF Technology Showcase in Aberdeen earlier this year.

“Argos was a way to kick off robotics [in Total]. For us this is just the beginning,” he says. “Now we are looking at robotic non-destructive testing and aerial unmanned vehicle (AUV) applications and shifting towards unmanned if we can prove autonomous functionality, to increase remote monitoring and automation.” The end result could be that platforms are designed differently, to accommodate robots, including AUVs and even rail systems, he suggests.

Five teams have been taking part: Air-K, Argonauts, Foxiris, LIO and Vikings, from Japan, Austria, Spain and Portugal, Switzerland, and France, respectively. The Vikings Team won second round and all five took part in the final round of the challenge, over five days, in March.

As well as being ATEX/IECEx compliant, the robots had to prove they could carry out rounds and perform one-off tasks autonomously, but also enable an operator to be able to step in and switch to remote control mode at any time.

The robot would also be expected to operate at the site of an incident, such as a hydrocarbon leak, and in potentially hazardous and harsh environments, ranging from -50°C to +50°C, hygrometry of up to 100% and sea spray, heavy rain and up to 100km/hr winds.

For the third round, instead of trying to put additional functionality into the robots, ranging from tracked to four-legged machines, Total decided to spend more time proving the existing functionality, including going up and down stairs and the autonomous functionality. The aim is to be able to “hit a button” and the robot will complete a mission autonomously.

Obstacle negotiation, included in the second round, was repeated, with the addition of a human presence – in which case the robot needs to detect there’s a human and go into standby mode. The site was also changed, so that it wouldn’t match the model with which the robot was programmed.

Communication loss was also tested – as was waterproofing as the teams had to operate in heavy rain on the first day and the ability to move up a long ramp (something some of the teams hadn’t anticipated). For one robot, false readings of heat spots were recorded (it had spotted the sun).

Kydd says that there have been two key lessons to date. The first is the communication. Wi-Fi was used on the test site, measuring 15m x 15m, with a remote cabin 10m away. “Already we can identify black spots,” he says. “So, we need to shift to 4G LTE. Wi-Fi is not robust enough.”

The second lesson is that robots don’t like to multi-task, he says. “We maybe wanted too much too soon. It is difficult to achieve in a single platform. We’re now shifting to more task specific robots, to take the complexity away, having smaller, simpler robots communicating together.”

Total is not alone in promoting offshore robotics. The Petrobot robotic challenge (OE: April 2016), involving Shell, Chevron and GE Inspection Robotics, looked to reduce the need for manual entry into pressure vessels has led to the forming of the Sprint Robotics Collaborative, based in the Netherlands.

A more subsea-oriented robotics challenge is Shell’s Xprize. It has set a challenge for teams to survey 500sq km of ocean bottom in 24 hours. Round 1 of the competition will see teams map 20% of that area and identify various features within 16 hours. We’re set to tell you more about this in the next issue.

Shell has also been developing Sensabot, for the North Caspian Operating Co. consortium, for use on unmanned islands of the H2S-rich Kashagan development, for faster, more efficient 24-hour response and inspections. 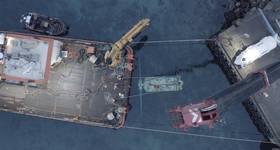