Supermajor Shell started production from its Stones development in the deepwater Gulf of Mexico, the firm reported on 6 September 2016.

The field’s FPSO, Turritella, is the deepest floating production unit in the world, operating in 9500ft of water. It is Shell’s 13th project to use an FPSO unit, and the Gulf of Mexico’s second FPSO behind the BW Pioneer, which operates at Petrobras’ Cascade/Chinhook development.

Shell says it expects production to ramp up to 50,000 boe/d by the end of 2017. The FPSO set sail from Singapore in November 2015, and arrived in the Gulf one month later.

“Stones is the latest example of our leadership, capability, and knowledge which are key to profitably developing our global deep-water resources,” said Andy Brown, Upstream Director, Royal Dutch Shell. “Our growing expertise in using such technologies in innovative ways will help us unlock more deepwater resources around the world.”

The supermajor said that Stones is its second producing field in the Lower Tertiary geologic frontier in the Gulf of Mexico after Perdido, which began production in 2010.

The Turritella FPSO is owned and operated by a joint venture owned by affiliates of SBM Offshore (55%), Mitsubishi (30%) and Nippon Yusen Kabushiki Kaisha (15%). Shell owns and operates Stones with 100% interest.

OE reported in-depth on the Stones development in the September 2016 issue.

The Stones development will allow Shell to learn more about the reservoir at this frontier deepwater field.

“We don’t have a lot of production history in this part of the Gulf of Mexico – that’s why it’s considered a frontier,” Curtis Lohr – Stones project manager, Shell International E&P, told OE. “If you look at where the FPSO is located, the drill center is in 9500ft of water, but also in this area there is a plateau that’s in 7500ft of water. The sea floor is very rugged, which created some challenges in terms of routing pipelines.”

Lohr continues: “The advantage of using a FPSO for this frontier project is the flexibility that it gives Shell – to learn more about this reservoir and grow accordingly. Stones is a really exciting prospect for Shell. It could turn out that it is an extremely large find, but we won’t know until we start producing.”

Due to challenges in the Gulf of Mexico, such as extreme weather events (like Hurricanes), and also water depth, the choice of using an FPSO to develop the field became obvious. Lohr said the flexibility to disconnect and leave in the event of extreme weather was important to Shell, but to also not have to use an oil export pipeline, given the depth and location of the field.

Read more about Stones in the September issue of OE. 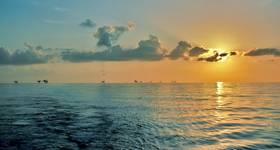 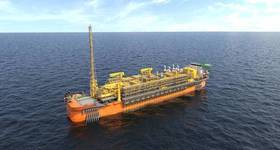